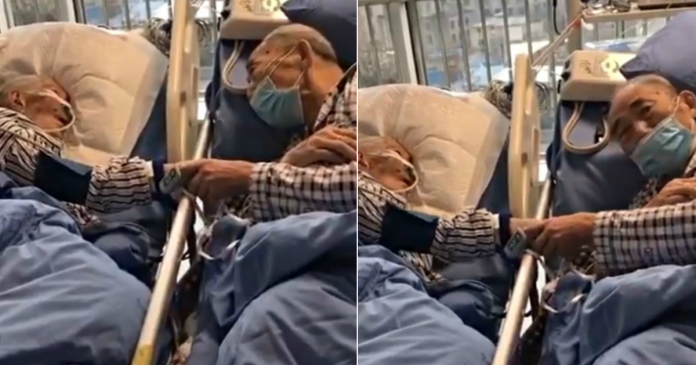 ‘Till death do us part’ is really the only sentence that can explain the love between this elderly couple in their 80s believed to suffer from the 2019 novel coronavirus (2019-nCov).

In the short video which first emerged on Douyin (China’s TikTok), the elderly couple were seen locking their eyes on each other and holding each other’s hands despite being hooked on contraptions in their hospital beds.

As the wife struggled to breathe, the husband kept on holding her hand and shaking it as if he’s telling her to be strong and stay with him, a little longer.

Believed to take place at an intensive care unit in Xindu No.3 People’s Hospital in Chengdu, Sichuan province, the 15 seconds video crushed hearts on many, including a spokesperson of the Chinese Embassy in Panama, Jiang Wei who reposted the video on her Twitter account.

“What does a couple mean? Two elderly patients of coronavirus in their 80s said goodbye in ICU, this could be the last time to meet and greet,” wrote Jiang Wei in her post.

What does a couple mean? Two elderly patients of #coronavirus in their 80s said goodbye in ICU, this could be the last time to meet and greet ??? pic.twitter.com/GBBC2etvV9

“In this life, maybe I’ll never see her again. I want to see her,” said the elderly husband known as Zhang to his children.

Meanwhile, Zhang’s wife, Wen who suffered from Alzheimer’s Disease reportedly admitted to the hospital the following day after struggling to breathe and suddenly fainting. Despite all the efforts to resuscitate her, Wen remained unconscious – which prompted Zhang to request seeing her.

Realizing that it might be their last chance to meet each other, the doctors wanted to grant Zhang’s wishes and let the elderly couple meet.

Due to their condition, Zhang was only able to hold Wen’s hand for a few minutes – but that’s all that he needed. Wen eventually passed away the following day. Zhang remains in the hospital for treatment.

Whether the couple truly suffered from coronavirus as the reposted video claim is unclear, but their love story did touch the hearts of many. May Wen rest in peace.

They were In-Love for 8 Months and About to Get Married…He...