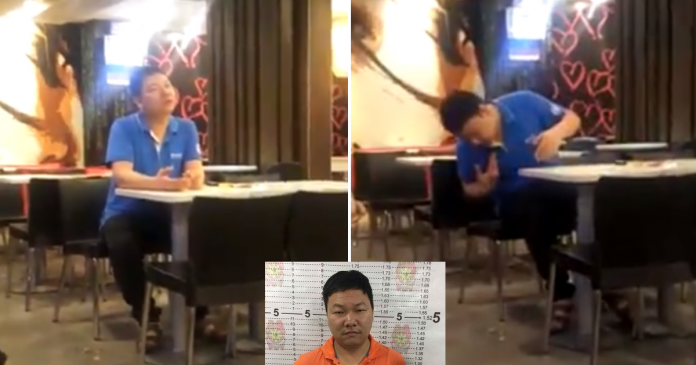 There are certain rules and ethics that has to be followed in public spaces, especially in restaurants, including no littering and no outside food is allowed.

While these are more established rules, some are discreet and unanimously adhered without needing a visible sign or black and white display.

This Chinese-national man broke all the said and unsaid rules when he was documented spitting inside a McDonald’s in Manila, Philippines. To make things worse, he deliberately spitted again on the floor when he was confronted by the restaurant’s security guard.

He even scolded the security guard rudely, and his ill-mannered actions were later found to be a result of his being under the influence of alcohol. He was waiting for his order, and when it took a a little longer, he got agitated and started soiling the floor with his saliva.

In the video, he can be seen banging the table several times as the guard is questioning him. His body language clearly shows that he is intoxicated.

The video has since been posted on Facebook, and received severe backlash and criticism from locals and netizens alike.

“If it’s Filipino doing this in China, they will be deported immediately back to Philippines from China! ” read one comment.

Some netizens believe this is the Chinese’ way of protesting for the ban Philippines implemented on them. The Bureau of Immigration (BI) found out that Chinese nationals came first in the list of most rude and unruly tourist in Philippines.

CNN Philippines reported on 23rd that the Authorities has nabbed this Chinese national man in Tondo, Manila. Police said that the suspect has used nasty “uttering unsavory” words in scolding the security guard which is not acceptable for the Philippines culture.