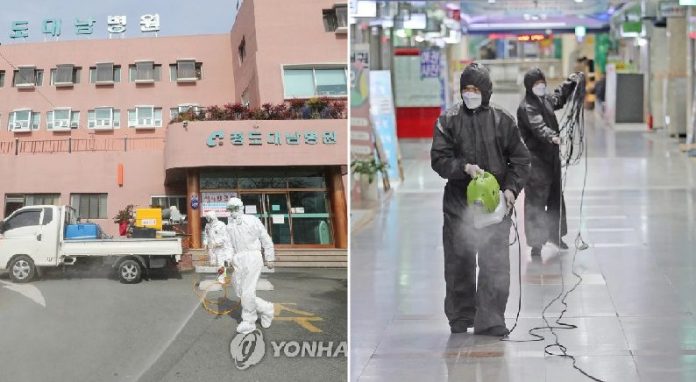 South Korea came forward with the highest level emergency alert as cases caused by Covid-19 totaled to a staggering 602 confirmed infections, with a fifth death made official just earlier this day.

According to Korean Center for Disease Control and Prevention (KCDC), in just a month since the first outbreak, the reported cases have been increasing in number day by day. Among the 123 new cases, almost 90% of them are said to have originated from the Shincheonji Church of Jesus in Daegu, the nation’s fourth largest city.

The spread begin when a 61-year-old church member attended at least four service sessions while having fever, before she was diagnosed and tested positive for the coronavirus.

Since then, more than 300 cases have been recorded involving the said religious institution, which resulted in close to ten thousand of the Shincheonji church members to be quarantined or put on stay-at-home order.

Panic buying in Daegu: scared ppl emptied shelves at Emart supermarket in Gamsam area as number of cases jumped till 70 in South-Eastern Daegu out 104 total in Korea

Daegu’s mayor, Kwon Young-Jin urged the his citizens to come forward to acknowledge relevant symptoms to prevent further infections as “hiding could you and your family’s health.”

Mayor Kwon made this statement in a conference which was responded by a spokesperson for Shinceonji Church of Jesus. Kim Si-mon mentioned that they have been giving their full cooperation to the authorities ever since the first infection was confirmed.

He claimed that they too are the citizens of South Korea, and possibly the biggest collective victims of Covid-19, which was a rebuttal to the nationwide allegations saying the religious sect is actually a cult.

As for President Moon Jae-in, he called for an emergency meeting to brief the severity of the outbreak and explain the current prevention measures, involving government agencies and medical representatives.

Remarks by Pres. Moon(@moonriver365) at Meeting with Municipal and Provincial Superintendents of Education

"Protecting the safety of children is the most important task of the Government and educational authorities."

“This will be a momentous time when the central government, local governments, health officials and medical personnel and the entire people must wage an all-out, concerted response to the problem,” announced President Moon.

President Moon added that the coming days will be critical for the entire country, considering the drastic measures implemented in line with Level 4 alert highly effects the economy and already-conflicting political stands the government is facing.

Meanwhile, Prime Minister Chung Sye-kyun has expressed his concern about the ongoing rallies in Seoul which might take a hard blow following the virus epidemic. He warned of the unsavory consequences these participants of mass gatherings might endure, given they do not adhere to the well-established ban against it.