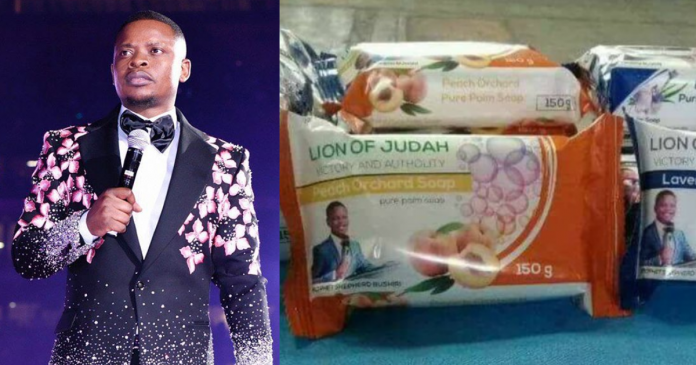 Free to sin the whole day, and cleanse yourself in the evening with this soap?

Quite a daring promise to make, don’t you think? Apparently, a man who claims himself a ‘prophet’ found an easy solution to save you from the wrath of hell.

Prophet Bushiri is the ‘messenger of god’ in Enlighten Christian Gathering (ECG) church in Malawi.

The foundation of every building matters. When the foundation is shaky and unstable it affects the entire building. This January, is your foundational month. The ideas, strategies and resolutions that you come up with will determine how the rest of your year shall be. If you fail to plan this year then assuredly, you’re also planning to fail! It is important that you begin to secure the rest of the eleven months right now through prayer and fasting and through jotting down the business and entrepreneurial ideas you have. God is looking for an active mind that He can breathe fresh ideas into. An energetic spirit that He can deposit fresh wisdom and anointing into. Are you ready ?

His latest holy work is a miracle soap designed to help sinners get rid of their lifetime wrongdoings with just a scrub and wash. Called the ‘Lion of Judah’, the sin-free soap comes in two fragrances; peach orchard and lavender.

The soap was marketed with the aforementioned catchphrase, which allows people to indulge in sins all day long, assuring they can ‘wash’ their sins off by the end of the day with this wonder soap.

The product has caused quite a stir among the locals, not only with its shady allegations but the price at which it’s sold.

While PRophet TB Joshua is still in 2017 PRophet shepherd bushiri is in 2030 pic.twitter.com/J95JcqyRTw

Selling a soap at $50 or 5035 in Malawian Kwacha is a huge rip off, given there are no tangible ways for the claims to be proven upon usage of the product.

Many have come forward on social media stating that it’s just another ruse staged by Bushiri to channel money to his personal account and gain quick fame.

Prophet Bushiri later responded to the criticism announcing that he has no connections to the Lion of Judah soap, calling them a tactic used by haters to tarnish his and the Ministry’s image.

According to him, people have also claimed in the past that he was selling Jesus’ blood and pregnancy tests personally anointed by the man of God himself. Though, his church members are supplied with a spray bottle of anointed water used for what he calls their ‘deliverance’.

“If you support and love our ministry, please share the post to show our enemies how big we are in Christ,” Prophet Bushiri mentioned in his official Facebook page.