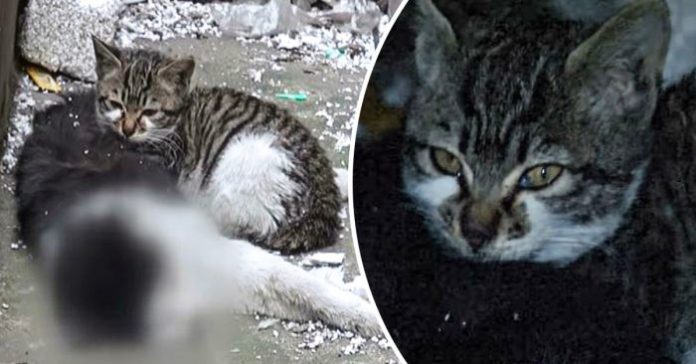 It was a dark, narrow alley where a poor little kitten made it his home for a strange reason. It seemed like he never left the place and cried all day, his eyes all dried up from the constant tears.

When he sensed the presence of human, he ran away into hiding but soon returned to where he was, never moving unless absolutely necessary.

It turned out that the kitten had been guarding a dead cat. The cat may have died about two to three days prior and there lay the kitten, on the side of the cat’s carcass, just crying and meowing as if mourning the cat’s death.

What was the bond this kitten shared with the cat and why has the kitten remained loyal to the carcass for days and kept crying?

According to neighbors who know the two cats, they are not actually family and only know each other while on the road. Apparently, the dead cat actually saved the kitten from being attacked by other street cats.

The adult cat once had a child but her baby died in an accident. Perhaps, she misses her little baby so much that she ‘adopted’ the kitten to be her own.

Naturally, the kitten became attached to the cat. They spent their days together, looking for food and playing around the neighborhood so much so that they became inseparable. That was until the cat mysteriously died one day.

Sometimes during the day, the kitten leave the carcass for a brief moment and walk over to the nearest alley where rainwater is collected in a tray. He would drink the water to quench his thirst.

Even then, the kitten will look back from time to time as if to see if something was wrong with the carcass he had left behind. He made sure he didn’t take long so he will hurry back to the cat’s body.

However, time came for the kitten to be separated from the cat. As the cat’s body decay, the smell started spreading and it cannot be left there any longer.  A local veterinarian decided to take responsibility for managing the cat’s carcass.

Knowing that someone was coming, the kitten once again escaped when the vet approached. He realized that the kitten need to be treated too, fearing that it would also be infected because it licked the carcass for days.

According to the doctor, the adult cat had died of a serious illness. Its body was thin because it failed to get nutrients due to organ failure.

The cat’s body was then taken away and the rescue team placed a cage there in an attempt to capture the kitten and rescue it. A blanket was placed in the cage to attract the kitten’s attention.

After waiting for several hours, the kitten reappeared in the alley but couldn’t find the dead cat’s carcass. The kitten started crying, looking worried and frantic. He kept looking for the carcass when he saw the cage and began to sniff the blanket that smelled like the adult cat.

The kitten was eventually rescued and taken to a veterinarian for treatment. Fortunately it was not infected with any disease. The doctor later confirmed that there were tumors in the liver and lungs of the adult cat’s carcass.

Her kidneys also failed to function and the big cat was very ill during her lifetime. However, in her unbearable pain she was still able to take care of the kitten, being the guardian and protector since day one.

Then the kitten found adult cat’s body again at the vet clinic.

He sat next to it and watched the the carcass of his guardian cat in quietly. He didn’t cry as usual and only watched over the carcass fondly. probably reminiscing the good times they had together.

This time, it was a final goodbye for real. The doctor brought the corpse away and the kitten began to cry again. He probably realized that this was the last time he could see a cat that had been his guardian and protector once, who kept him safe and secure.

Probably that’s why the kitten remained next to the cat’s carcass. He thought he could repay the cat’s kindness back to her, by doing what she did for him; standing by his side at all times.

Sad Pitbull Dog Crying at the Shelter Realizes How Great Her...