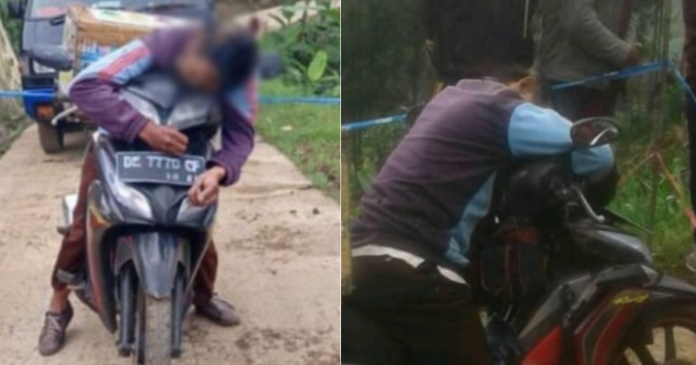 A father is the head of the family and we can’t deny how hard they work just to provide for us every single day. However, we often take that for granted and neglected how big a father’s love can be.

The love of this 66-year-old ice cream vendor called Misyanto from Indonesia to his family was out of this world as he often ignored his headaches and breathing difficulties just so he can continue working.

Disregarding his health condition and frequent unhealthy signs, Misyanto was unfortunately found dead while resting on his motorcycle.

It all started when a local named Suwoco was trying to cross the road and saw the ice-cream seller resting his head on his motorcycle handle. Clearly unaware of what is happening to Misyanto, Suwoco blew a horn to call the man’s attention but he seems to completely ignore it.

Misyanto looks like he’s trying to take rest on his motorcycle handle.

That brought Suwoco to approach Misyanto and later realized that the poor man was no longer breathing. Later, the locals at Desa Ledokombo, East Jawa who spotted the man’s lifeless body immediately alerted the authorities.

According to the authorities, investigations revealed that there weren’t any indications that the ice-cream vendor was killed or possible struggle. Furthermore, Misyanto also still had all his belongings with him.

After the medical examinations, it was stated that the most probable cause of Misyanto’s death was exhaustion due to overwork.

“His family members said that he would always complain of having headaches and breathing difficulties. Yet, he insisted on going to sell his ice creams,” said the police representative to Sura Indonesia.

Make sure to make your health a priority and do not overwork yourself. May Misyanto rest in peace.