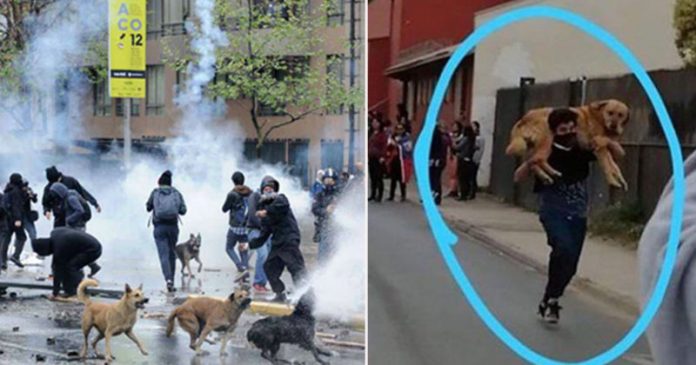 As Latin American countries are having a political crisis, violent protests in various cities claim dozens of lives, but amidst that, we get to see a beautiful relationship between humans and animals.

In the midst of the bloody protests launched by the people of Chile to express dissatisfaction towards the government, dogs were trapped in between tear gas and stones thrown by residents and the security forces.

It’s a war between human, but the poor dogs become victims.

As people want their voices to be heard and to defend their rights, some people didn’t take into consideration the possible damage to other living creatures in the area – dogs.

Fortunately, there are few protesters that pay close attention to this matter and help to save the poor animals without any second thought.

These people pick the dogs and take them to a safer place, far from the violence and heated protests.

“When I saw the helpless puppy, I felt the urge to get it out of there and save it in any way possible. Nothing else was important to me at that time,” said one of the dog savior.

For them, the life of this poor dog is as important as ours.

As a large amount of tear gas was released by the security forces, the dogs lost sight of where to go. This is when all these angels in disguise appear like guardian angels to save them from the danger. Hundreds of street dogs were also given water, food, and shelter by these young protestors who treat these dogs like families.

“These dogs are helpless animals, their lives matter to us,” said another protestor.

Thanks to these amazing kindhearted people, most of these dogs are safe and in a better place.

A Woman Brings Home a Dog by Mistake and Found that...