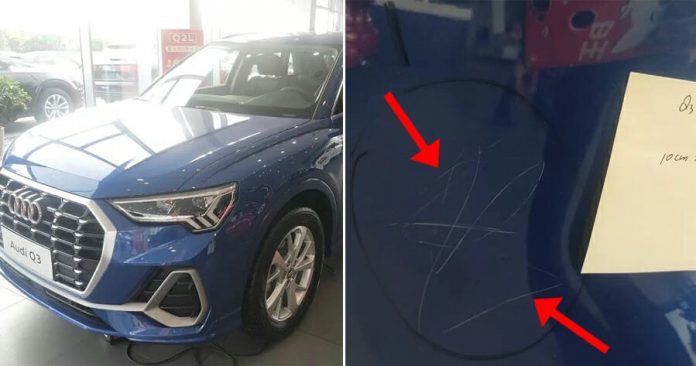 Kids can be unpredictable and up to serious trouble especially when they’re left unattended. A couple in Guilin, China learnt it the heard way when they recently took their 3-year-old daughter to a car showroom. And it’s not just any car, but the renowned Audi brand.

They were looking around at the cars on display while they daughter was wandering around nearby, doing a little sightseeing of her own. What they would later find out is that the girl did not just stop at marveling at the lavish cars.

Unbeknownst to the parents, the toddler was carrying a small stone in her hand. She took the liberty of running the stone along the bodies of the brand new cars as she was making a stroll around the showroom.

Much to her parents’ nightmare, she had scratched 10 cars and caused visible damage to them. Lost at words and not knowing what to do, the parents just stood there watching the aftermath of the horror.

By then, the car dealer had acknowledged what had happened and demanded them to pay a compensation of 200,000 yuan (approx. $29,000). Knowing they could not afford to pay the amount, they declined the agreement. They resorted to bring the issue to legal attention instead.

The case was taken to court for mediation but the car dealer argued that the cars were damaged for good. Even if they were given paint jobs to mask the scratches, they could not be sold as new cars technically. Hence, the cars had to be marketed at reduced prices and this would cost huge loss to his company. In addition, he could be charge for fraudulence if potential customers were to discover the truth.

The issue was resolved by both parties, and the parents agreed to pay 70,000 yuan ($10,000) as decided by the car dealer. The court further warned the couple that the child’s age and oblivion towards her actions cannot be deemed as valid reasons in legal settings.

They were advised to watch their child closely and to educate her on the rights and wrong of her actions. The couple should be thankful that Audi did not take matters into their own hands and sue the couple for property damage.

It could have ended much worse. Hopefully, they take this unsavory incident as a lesson to be more attentive towards their child and surrounding.

A Thai Woman Kneels on One Knee and Proposed to Her...