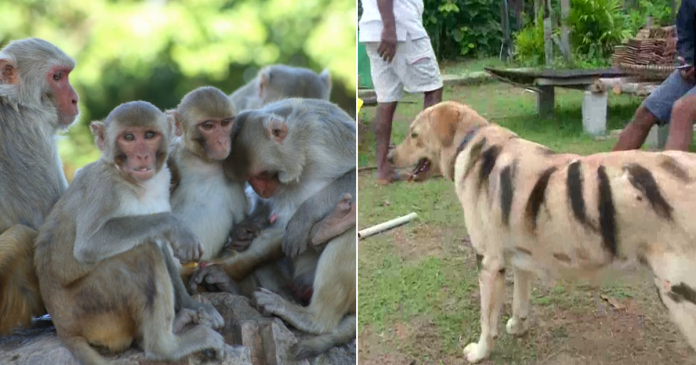 Modern problems require modern solution. The idea of ​​a farmer in India disguising his pet dog as a tiger has managed to scare a group of monkeys that were invading the plantation had farmers praise him for thinking out of the box.

Srikanth Gowda runs a coffee plantation in a village in Karnataka. A few weeks ago, a group of monkeys stumbled into the area and feasted on the coffee beans, ruining their crops. Srikanth tried to repel these naughty monkeys with a trick he learned from a friend over 4 years ago.

He placed a tiger plush statue at the entrance of the plantation where the monkeys gather. At first, this method temporarily warded the monkeys off the coffee plants.

However, once the color of the stripes began to fade from the statue, the monkeys resumed their antics.

The resourceful farmer then had an idea. He took a tub of black paint and drew stripes on his pet dog Bulbul that resembled those lines found on tiger. Bulbul was brown so he easily passed off as a tiger from a far distance.

“Though the tiger sculpture trick was initially effective, when the color faded, the monkeys came back and ruined the crop,” Srikanth said.

After finding that Bulbul’s disguise as a fierce jungle predator succeeded in frightening the monkeys, Srikanth has brought the dog to his coffee fields every day in the morning and evening to keep out all the monkeys.

“I saw them all running around after seeing Bulbul,” said the farmer. The monkeys do not dare enter my field now.”

Srikanth claimed that black stripes on Bulbul’s body is painted using black hair dye. It’s harmless and would disappear on its own within a month.

In addition to Srikanth’s brilliant effort to drive the monkey out of his field, he also placed posters of Bulbul and a real tiger there.

Srikanth’s method was so effective that it has been followed by other farmers who have been facing the same issue with the cheeky primates. Now all the villagers are thankful to Srikanth for coming up with such a thoughtful and effective idea to get rid of the pests.

Farmers in Karnataka are no longer worried that their crops are being eaten by monkeys thanks to the cute ‘striped tigers’ roaming their fields. Unlike actual tigers, these ones don’t roar. They only bark and even wag their tails in return for a few belly rubs.