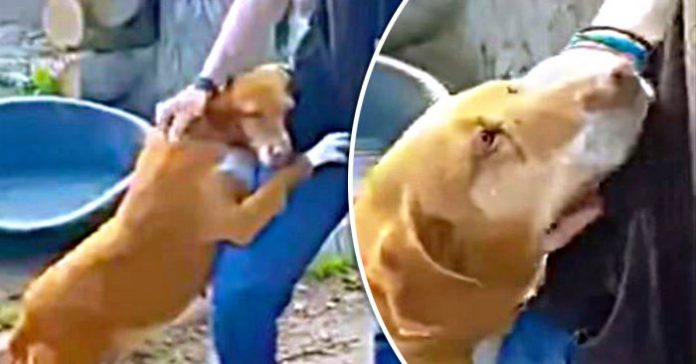 Many say that with just a glance, animals can tell when they get to meet kind people – and this one dog sure did.

When a journalist who was assigned to cover a story on an animal shelter stepped into the place, a female dog living in the shelter suddenly came towards him – not to attack him, but to hug him instead. The dog hugged the journalist so tight, people might think that he must be the dog’s long lost owner.

People say that dogs choose their owners, and this dog must have chosen its own. Said to have been living in the shelter for quite a long time, the dog seems to have decided to follow the journalist home as soon as it saw him.

Please bring me home with you!

The dog affectionately hugged the journalist’s leg and even placed its head on his thigh, as if telling him not to leave it in the shelter.

In the 35 seconds video, the dog didn’t look like it will move anywhere anytime soon. Looking at how the dog behaves, the journalist repays the affection by stroking its head.

No one is willing to leave the dog if it does this.

It’s not going to move anywhere.

Looking at the dog’s sad expression, it might have been through such a hard time before being rescued and placed at the shelter. Thankfully, the journalist decided to take the dog home with him and this abandoned dog has now found its new owner.

We wish them stronger bonds together, forever!