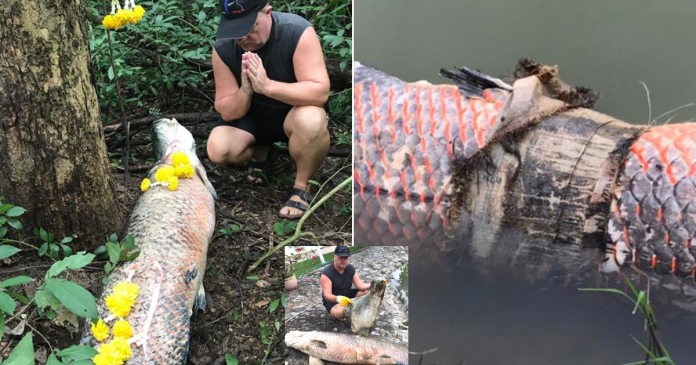 Humans nowadays are generating huge amount of plastic trash everyday and very small percentage of it gets recycled properly. To make the matter worse, irresponsible people are littering plastic rubbish everywhere in the cities, towns, oceans, rivers and lakes, bringing huge negative impacts to our environment safety and also endangering the wildlife.

Thousands of photos of animal death caused by plastic waste had emerged in the Internet but yet people are still not learning the lesson to take good care of the environment and wildlife. At least 8 million tons of plastic trash end up in our oceans every year! Just imagine how bad that could be!

Recently, on July 25, The Thai-Fishing facebook page shared an angry and sad post on Facebook announcing the shocking news of an expensive species of pregnant Arapaima female under their care with her precious egg that was killed by a plastic trash thrown by irresponsible people into her habitat.

The Arapaima’s name is Ryan, she was found lifeless and floating on the surface of the cliffs of a habitat under the care of Thailand-Fishing group.

We can see a big plastic sack wrapping her stomach that could have caused tremendous pain to her before she passed away.

We are very sad and angry today.
Our beautiful and pregnant Arapaima is dead.
Because ignorant and careless people just throw away their plastic garbage in nature.
Our beloved Arapaima named Ryan swam in a plastic sack that gave her an agonizing long dead.
What probably costs life every day in the sea, fish, dolphins, turtles, happened today on our doorstep.
Ryan, who we hand-fed every day, was 7 years old and was 188cm long and over 70kg.
Rest in peace.
Will people ever learn to live with nature and respect her?

Ryan was given a proper burial by the owner and he had to remove the plastic bag first and clean her body.

Thousands of beautiful and colorful eggs are found in Ryan’s womb.

The owner is very sad and he puts some yellow flowers on her body and says final goodbye to her with a namaste gesture.

We hope everyone who read this news can learn the lesson well. Please do not litter around and please protect the cleanliness of our environment! This way, we can save more endangered wildlife and ultimately we can benefit from our good behaviors. Who doesn’t like to live in a clean and safe place right? Please share this story with your friends and communities to tell them the importance of preserving our environment!

Note: Arapaima gigas, also known as pirarucu, is a species of arapaima native to the basin of the Amazon River. Once believed to be the sole species in the genus, it is among the largest freshwater fish.