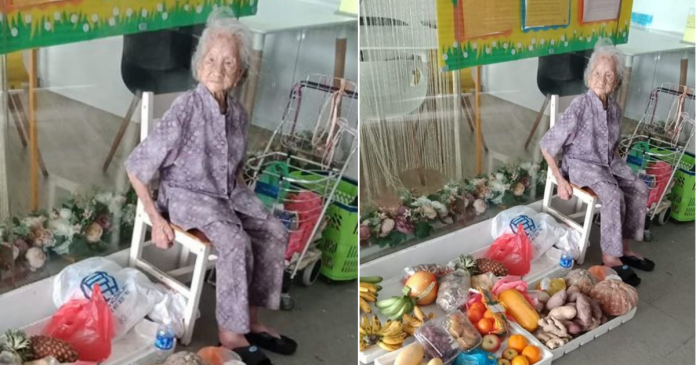 A photo of the elderly woman sitting on a chair at her fruit stall recently made rounds on social media after user Samuel Lee shared it on Facebook.

According to Samuel, the 97-year-old grandmother sells fruits along the 1st floor of the Thomson VTwo corridor in Singapore

She can be seen selling her fruits in the corridor every weekend from Friday to Sunday, from 11 am to 5 pm.

In his post, Samuel encouraged everyone to buy fruits from the grandmother and support her business.

“She is a very honest old granny as she will tell you that she sells fruits which she bought from Sheng Shiong and will sell it at a slightly higher price for a living,” Samuel wrote.

“But because of that, no one is willing to buy from her as they can get direct from Sheng Shiong at a cheaper price.”

Given her old age and fragile body, it is impressive to see how the grandmother still manages to sell fruits in the corridor to earn some money 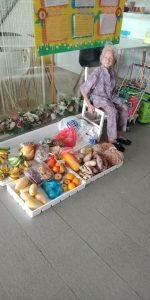 Samuel added that while the grandmother could not remember those who kindly bought fruits from her and gave her food and drinks as they passed along the corridor, she shared that she was happy to receive kindness from strangers despite not being able to sell well.

“She might not remember you to be coming and visit her like me, passing her some cash and buying her food and drinks. But, she also did mention that for that instance, she is very happy,” Samuel wrote.

Nevertheless, Samuel responded that if she was actually well off, her effort and willingness to continue her business during her golden years should be admired and praised.

“Shouldn’t we just support the spirit in her and her willingness to be still wanting to earn money by herself at this age?” he wrote.

Since it was first shared on Facebook, Samuel’s post has garnered 5,500 thousand likes and been shared over 11,000 times!

Thanks to his post, it looks like the grandmother may be receiving more customers than she would usually get as many shared their intentions to help her out

One netizen ever shared a picture of the grandmother with all of her fruits sold out for the day!

We hope that the grandmother is always blessed with good health and may her business continue to prosper for more years to come!