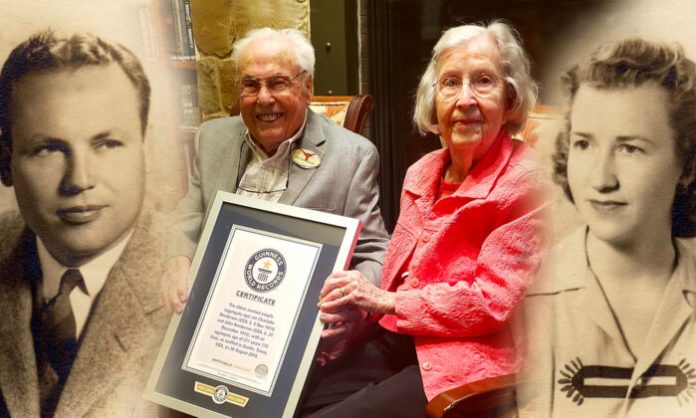 Texas elderly couple, John Henderson and wife, Charlotte who got married in 1939 has claimed the title of the oldest living couple in the world according to Guinness World Records.

The couple received their Guinness World Record certificate earlier last month in November, just a month away before their 80th anniversary on December 15.

John, 106, and Charlotte, 105, first met at the University of Texas in 1934 where John was working as a guard for the football team while Charlotte was studying to become a teacher.

Now in their 100s, both Charlotte and John still boast good health compared to most of their peers which John believed is contributed by their modest way of life.

“We never overdo anything. Eat well. Sleep well. Don’t overdrink. Don’t overeat, and exercise regularly,” John revealed the secret of longevity in an interview with USA Today in 2017.

While a 2015 Belgian study found that men benefit more from a marriage than women whom “living alone is more advantageous than living with a spouse,” both John and Charlotte proved that a good and healthy marriage could benefit both parties in the long run.

Their 80 years of marriage may have helped contribute to the couple enjoying their lives and health even when they have passed 100 years old.

“We had such a good time when John retired. We traveled a lot,” Charlotte said. “We just stay busy all the time, and I’m sure that helps.”

As for John, he has a simple piece of advice to those who wish to enjoy their retirement days in good health and happy marriage.

“Live life in moderation and be cordial to your spouse!” John said.