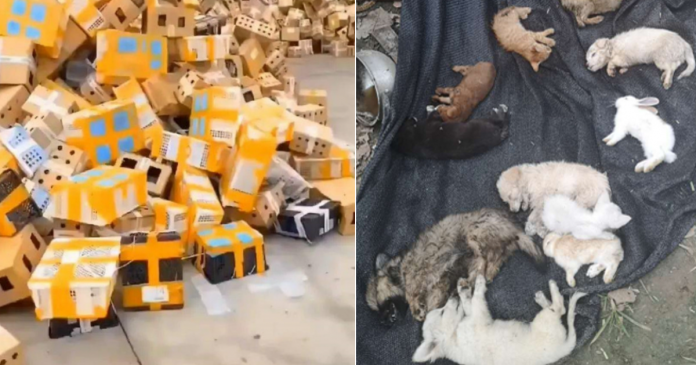 Thousands of animals in small boxes arrived dead in Luohe City. 5,000 dead domestic animals – dogs, cats, rabbits, and hamsters – were found in package-mail boxes at the Dongxing logistics station in Henan Province in Central China, Global Times reported. The animals were placed in iron or plastic cages that were enclosed in paper boxes.

Here are some photos from the scene. (WARNING: Some pictures may not be suitable to the faint of heart.)

One of the members of Wutuobang, a Chinese animal rescue organization, volunteer Dan, informed Global Times that 20 members of their organization came to rescue the animals at the logistics area on Sept. 22. According to various Chinese media reporters, a total of 1,074 animals have survived the ordeal. There were 877 rabbits, 99 hamsters, 70 dogs, and 28 cats that were still alive. The animal rescue volunteers have prepared some canned goods, and the animals that survived were all given vaccination.

Here is a video from China Times:

Luckily, some of the surviving animals were adopted by loving families, and the others are still being treated at the veterinary clinics. The other 5,000 animals that did not survive died due to thirst, starvation, and suffocation. Dan from Wutuobang informed Global Times:

“The stinking boxes cluttered the station, and lots of animals inside had died of suffocation, starvation or thirst.”

The dead animals were buried in nearby farms.

The organization discovered that the packages were illegal and were from a pet breeding farm.

The animals were sent from breeding farms in Anhui and Jiangsu provinces and were shipped for online buyers who ordered them and be made as pets, China Times stated.

Employees of the express delivery company, Yunda, which was responsible for the packages, confirmed that their company allows shipping of live animals as long as they are in proper boxes with holes. They have never heard of the incident, according to the employees.

An animal rescue volunteer said that the breeding farms pay large amounts of fees to Yunda to be able to ship them in regular boxes since transporting them via post has been banned in China. Global Times has confirmed that the law implemented on live animals being shipped in packages is prohibited has not been enforced since there are no corresponding penalties on this matter.

As of late, the local authorities are still investigating the incident and finding a way to prevent this kind of incident from happening again.

Adopt a pet, do not online shop.

Wuhan virus speculated to have originated from bat or other wildlife,...