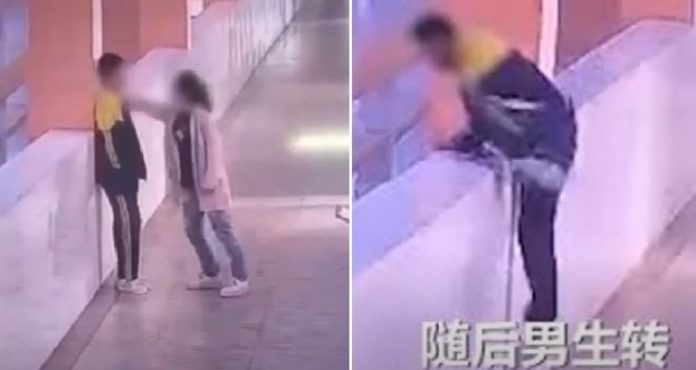 A teenage boy in China felt humiliated and jumps to his death after his mom slaps him in school.

School tragedy: 14-year-old Zhang from Wuhan, jumped and fell to his death from a school building, reports Global Times.

Zhang is a 9th-grader at a top middle school in the Jiangxia District. The school’s headteacher summoned the teenage boy’s parents for a conference after he was caught playing poker. CCTV footage situated in the school’s hallway showed that the mother was very upset and slapped her son twice after the meeting.

It was unclear if the woman who tried to pacify the angry mother was the headteacher. Shortly after the incident, the mother left, leaving Zhang standing in the hallways for a brief moment, humiliated. Later, the boy climbed on the railing of the fifth floor and jumped to his death. Students nearby attempted to interfere and stop him but to no avail.

Trending topic: This tragic incident regarding the boy’s suicide has sparked an investigation by local education and judicial authorities and caused a heated online debate on Chinese social media.

On Weibo, news about the tragic incident garnered hundreds of millions of views. Some people expressed their point of view, saying that parents should not humiliate their children in public. On the other hand, others also expressed their point by saying that parents are not to blame as teens often struggle psychologically and can easily be swayed by their emotions. Some concerned citizens have asked other people to refrain from criticizing the mother as she is now grieving the loss of her son.