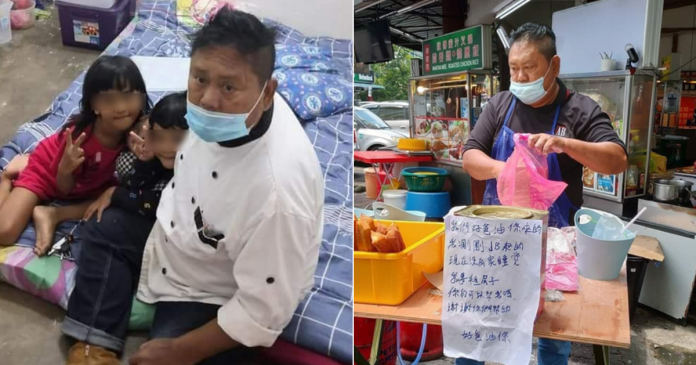 He sells Yau Char Kwai, a fried dessert, in a stall at Taman Serdang Perdana, Seri Kembangan, and everyone is invited to visit and support his business.

When they relocated to Selangor, Malaysia, a father with 2 daughters opened a business selling local fried dessert for a living.

His story gives inspiration to people and is calling out to Malaysians and to other people visiting Malaysia to help support his business.

The unnamed father and his 2 daughters are originally from Johor Bahru, Johor, a state in Malaysia. He immediately got a lot of attention from the Malaysian public when he shared his appreciation in a post on Facebook, thanking all of those who have visited his stall and supported his business.

In a Facebook post, the same that was re-posted in a community page on the 6th of June, the father mentioned that there were good citizens who supplied him with materials for his business and there were even citizens with the same line of business who gave him pieces of advice on how to make the fried dessert and make his business flourish.

“I will work hard, work very hard to do it well!” he said.

“Don’t give me money, as long as you support my business and give your feedback is enough! I can manage to do my business well. So far, I make enough money to pay rent. I will worry about my problems some other time.”

The father is a single parent and is the sole caretaker of his two daughters, ages 6 and 10.

He has named his business ‘Hao Ba You Tiao,’ which means ‘Good Father’s You Tiao.’ You Tiao is the Mandarin name for the snack he sells. He recently started his business at a kopitiam on Jalan Anggerik 39, Johor Jaya, on June 4.

Hardships started coming in upon starting his business in Johor.

Eventually, he decided to relocate with his daughters to Seri Kembangan, Selangor, Malaysia, hoping he would be able to make more money in a bigger city. His stall is located outside Restoran Peng Chu on Jalan SP 2/3, Taman Serdang Perdana.

An image of his new stall shows a note that reads, “We are Hao Ba You Tiao. I just came from Johor Bahru, and I don’t have a house to live in. I need to rent a house. Can you help me?”

The photo was posted on Facebook on the 22nd of October.

When you visit his stall, you will find him selling yau char kwai, five-spice doughnuts, red bean paste doughnuts, and sesame doughnuts for RM1 each.

“It is not easy to take good care of 2 daughters. This COVID-19 pandemic doesn’t seem to go away yet, and it’s affecting my business. I have no income and my pockets are empty. Adults can choose not to eat but the children cannot,” the post said.

Calling out to people in Malaysia. “Please support his business!”

The post has gone viral in less than six hours, with more than 5,600 shares to a different social media platform.

Many of the netizens have promised to drop by his stall and show support.

“Admire his dedication and [the] never give up attitude. At least he’s working to earn an honest living. Will definitely support him even though Serdang isn’t near [to] me after this Conditional Movement Control Order (CMCO),” commented a netizen. “Wishing him good business and hope he gets to rent a decent place soon.”

“He is not asking for donations. He is just asking everyone to support him and buy yau char kwai when you are free. He has a strong character,” commended another.

A Facebook user who read the post asked for the father’s account so he may send some money to ease his financial difficulties, though a fellow netizen advised him otherwise.

“Go patronize him and let him make money from selling yau char kwai. This will give him a greater sense of dignity instead of having him put his hands out and beg for money,” a netizen said.

You can visit his stall, Hao Ba You Tiao here: