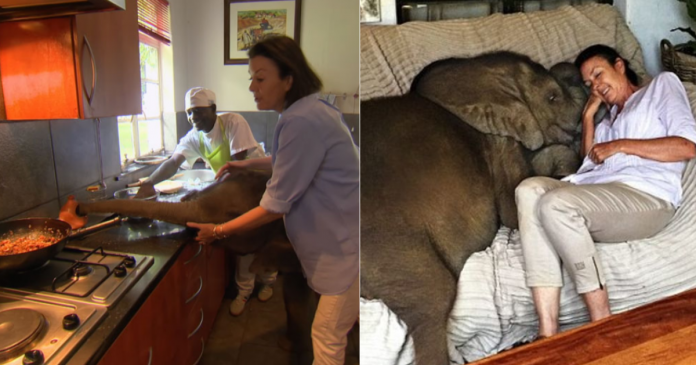 From an orphaned elephant in Zimbabwe to wildlife protection ambassador.

It is very common for most people to have pets at their homes, such as a dog or a cat. No one would have expected that a woman from Zimbabwe and founder of wildlife sanctuary Wild is Life, has been living with a rescued baby elephant named Moyo. Roxy rescued Moyo back in 2014 and brought the baby elephant to her home. Roxy and Moyo have been living with each other since.

Moyo was just a few days old when she joined a herd of elephants that were crossing the river. She was having difficulty coming ashore, and the herd has already left Moyo, abandoning her. When she finally made it, the herd has long since gone, and a pack of hyenas has been eyeing her. Fortunately, Roxy and some rangers came in the nick of time to rescue her and brought her back to the reserve.

Roxy knew that baby elephants like Moyo will not survive in the wild without their mothers. Since Moyo was in poor health at the time, she only weighed merely 56 kilograms. A baby elephant should weigh about 90 to 100 kilograms when they are born. Roxy nursed Moyo back to health by supplementing her 18 liters of formula each day. With Roxy’s perseverance and Moyo’s strong will to survive, Moyo grew up smoothly and in good health.

Roxy did not only rescue Moyo, but also accompanied and even slept with her. As long as Roxy is with her, Moyo feels very secured by her presence not worrying about the herd that has left her behind. Now that Moyo has grown up to a full-sized elephant, she regards Roxy as her mother.

Since Moyo is still growing, space indoors has started to become too narrow for her. Roxy usually plays with Moyo outdoors, but she prefers to play indoors with her mother. Although Moyo is grown up, she is still like a playful child at heart and very curious about her surroundings. She loves to explore around the house, goes to the kitchen to steal fruits, and plays with some tableware.

Since Moyo became afraid of the water because of the river incident when she was still a baby, Roxy carefully made her overcome her fear by encouraging Moyo to play with her in the water. After 15 months of hard work, Moyo was able to overcome her fear and started to enjoy water activities.

Roxy and baby elephant Moyo share a deep connection that has touched the hearts of many people who has watched the video below:

Baby elephant Moyo would have not survived if it has not been for Roxy’s help. Since Moyo has considered Roxy to be her mother, they share a deep friendship that can last a lifetime.

She is the founder of “Wild is Life,” a wildlife sanctuary in Zimbabwe. Roxy has rescued many different animals and brought home to the sanctuary, thus it not unusual to see animals sleeping on the sofa or roaming inside the house. She has been nursing sick and abandoned animals for nearly 20 years.

“My childhood was based around animals… animals always came first in our extended family! Horses were the passion of my mum, her sister and my Grandmother, so we lived on a farm with a riding school, cattle, sheep, dogs, cats, owls, hamsters, ducks, geese… the works.”

Roxy has acquired a great reputation due to her knowledge and experience in the care and rehabilitation of animals that are in need. Although looking after rescues animals has been a challenge for her, she has fulfilled her dream of a lifetime. She has opened the first elephant orphanage behind the sanctuary, and Moyo was the first elephant to be its resident.

“Simply love and dedication” are what drives Roxy to fulfill her dream sanctuary, and with the building well underway, Roxy made it a promise to take good care of all the elephants and bring them back to the wild where they belong.

This tortoise loves to play soccer with its dog best friend