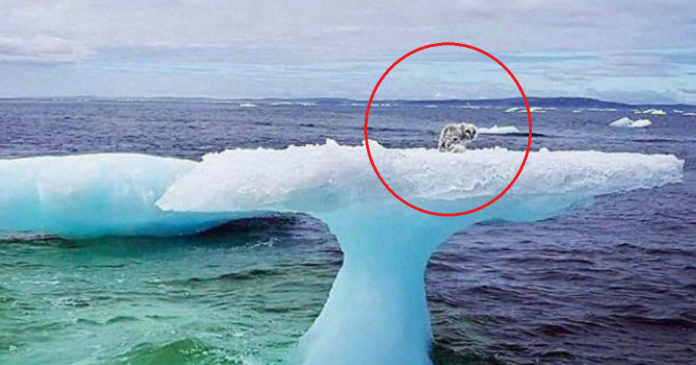 The water was still and calm. The day was sunny and the wind was kind to the sails of their boat as avid fishermen, Mallory Harrigan, Cliff Russell, and Allan Russell set out into the ice-berg filled Labrador Sea, giving them hope of a bountiful catch of Canadian crabs.

Well, that is what they thought! But fate had some other plans for them.

They were already about 6km out into the open sea, carefully avoiding huge chunks of icebergs adrift in the chilly waters.

The trio had to ensure they paid great attention to their surroundings, as well as the weather conditions. Allan Russell was the lookout guy, observing the sea for potential hazards.

Everything was smooth sailing for them until Allan spotted an iceberg at a distance and perched right at the top of the mushroom-shaped iceberg was something he couldn’t figure out. He called out to his buddies but they too couldn’t quite tell what it was.

Both Mallory and Cliff thought that it could be just a seal, as they had spotted these animals in the cold water before.

But Allan wasn’t satisfied and went for his binoculars as Mallory and Cliff steered the boat closer to the iceberg. They were cautious as the waves were becoming choppier and the boat was rocking.

They were close enough to realize that it was an animal, but it didn’t look anything like a seal as the animal had four legs!

It was an Arctic fox which was struggling to move upon seeing a boat edging closer to the iceberg. The trio had by now made up their minds to save the poor little creature before dark.

But how did the animal end up on the iceberg? How long had the fox been adrift? These were the questions that ran through their minds.

Mallory concurred with Cliff’s suggestion that the fox got out to the iceberg to check out a bit of meat when the ice broke apart, sending the fox out to sea.

Anyway with time running out and darkness creeping in, the trio, convinced that the fox wouldn’t survive with help, pulled their crab fishing boat alongside the iceberg.

They were careful not to scare off the little fox. They started to chip the ice around the fox to prevent it from escaping.

With the help of a dip net, they managed to catch the terrified fox which tried to wriggle out of the net until it ran out of steam and gave up.

They picked up the fox and once on the deck, they wrapped the soaking wet fox in a towel, dried its coat to keep it warm.

Putting their crab catching exercise on the hold, they steered the boat back to the shore while keeping a close watch on the foxy. They made a warm bedding for the fox using sawdust to help trap heat.

“He slept through for the first 5 or 6 hours and when he woke up we fed him a tin of Vienna sausages,” said Mallory

Back on dry land, they released the fox into its natural habitat, a lovely patch not far from the boat dock.

And they watched from afar as the little fox disappeared into the wilderness. They felt relieved and happy and couldn’t wait to tell everyone about their “ foxy adventure” in the high sea!

When Her Husband Died, A Mother Took Her 5 Children into...