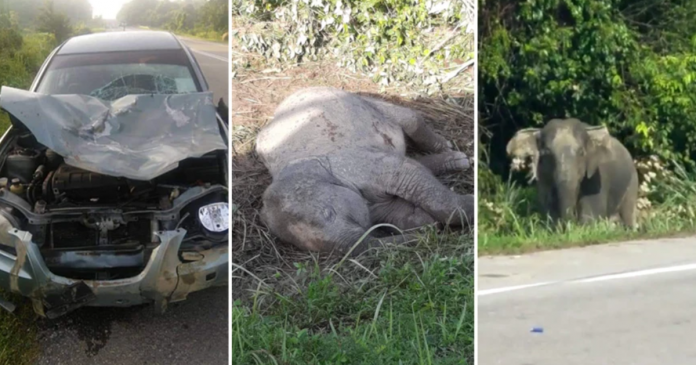 Elephant mothers are particularly affected by the death of a young calf or new-born, and may spend days standing with, touching and even attempting to lift the body of their departed offspring.

It is a “striking behaviour- not based on survival or necessity, but based on some sort of emotion.

This is story of an elephant mother, expressing her emotions, over the lifeless body of her calf which was hit by a car.

It only demonstrates how deeply these animals, which are known for their fierce loyalty and their moving displays of emotion, can feel.

According to Facebook page Info Roadblock JPJ/POLIS, the elephant mother was seen standing beside her dead child while the car involved in an accident on Jalan Mawai heading towards the coastal town of Mersing in Johore.

A passerby, who was looking for some edible ferns in the fringe of the jungle nearby, said curiosity got the better of him when he spotted an elephant standing by the road side, near a badly damaged car.

“It is unusual for elephants to do so, “he said, adding he was unable to figure it out until he noticed a baby elephant lying on the road shoulder.

The elephant mother appeared disoriented, one moment trying to wake her baby by touching parts of the body and the next moment going round in circles on the road as cars passing by slowed down or hit the brakes to avoid crashing into her.

When elephants are with the dead body of a loved one, they are known to extend their trunks and touch the body gently- even running their trunk tips along the lower jaw, tusks and teeth – which are parts most touched during greetings.

In another video posted on Orang Kota Tinggi, warning shots could be heard being fired into the air, probably to chase the grief-stricken elephant mother back into the forest.

While some netizens questioned if it was proper to fire warning shots to scare away the confused animal, other commented that if she is not chased away from the spot, it would be difficult for the authorities to dispose of the carcass and give it a proper burial, as opposed to leaving it on the side of the road, like a discarded apple core.

Some also felt if the elephant stayed put at the roadside, there was possibility of more accidents happening.

While most animals do not show great interest in the bodies of their dead, elephants are one of the rare few creatures that actually mourn. Wild elephants have already lost so much of their forests and more of them are coming out, even crossing roads, to find food, very often with their babies on the tag.

The onus is on drivers to ensure that if they are driving in the dark or on a road next to a forest and come across wildlife, they exercise caution by following the steps below:
• Slow down or stop your vehicle. Give the animal some space.
• Keep calm!
• Lower your lights. Do NOT flash light them.
• Do NOT honk your car! Animals when startled can become violent.
• It is safer to be IN your vehicle than going out.

It is also the correct protocol for motorists who hit animals, to report the incident to the relevant authorities so that they can investigate, perhaps add extra precautions and warning signs.