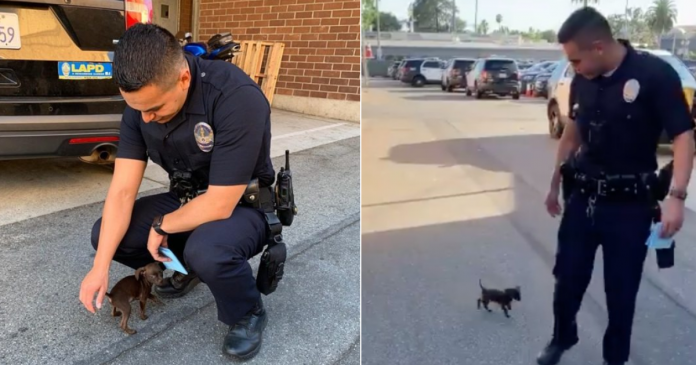 There is a hero in all of us, more often than not, dogs feel that, too. Among all the situations we encounter daily, there is always a touching story behind them. This is a story about a miniature pup that was abandoned and has been wandering the streets of Los Angeles ever since.

Upon seeing 2 police officers, Mercado and Tavera from the LAPD, one day, he ran and stumbled towards them with his little legs. The tiny pup immediately felt close to Officer Mercado. He nicknamed the pup, Hobart, after the street where they found him.

Hobart did not want to leave Officer Mercado and just kept following him wherever he went. Seeing how tiny he was, the officer could not bear to leave Hobart behind, and since he was too tiny and young to live on the streets on his own, he consulted Officer Tavera and decided to bring along Hobart with them to the police station.

On the way to the police station, Hobart was well-behaved. Sitting on Officer Tavera’s lap, Hobart kept looking at the 2 officers with adoration, feeling grateful that they have saved him.

Officers Mercado and Tavera did an investigation and found out that Hobart’s owner has abandoned him. They both decided to find a new home for Hobart by sending him to an animal shelter until a new owner would adopt him.

Netizens who have seen Officer Mercado’s post on Twitter think that he and Hobart had a good start and had immediately connected. They suggested that he adopt Hobart. Officer Mercado thought it was a good idea, and without any hesitation, decided to adopt Hobart and made him the happiest little puppy. He often brought Hobart to the police station and he was loved by all the officers. Soon he was given an honorary K-9 title.

Although Hobart was very friendly to everyone, his favorite officer was Mercado. Officer Mercado did not let him down either by giving him a warm welcome to his home.

We all have heard the phrase, “Adopt, Don’t Shop.” Hobart used to be homeless, wandering the streets on his own. Now, not only does he have a master, but also colleagues. Fate has been very kind to Hobart, and it has changed his life forever!

The LAPD shared Hobart’s and Mercado’s story on Twitter, and it has touched so many hearts.