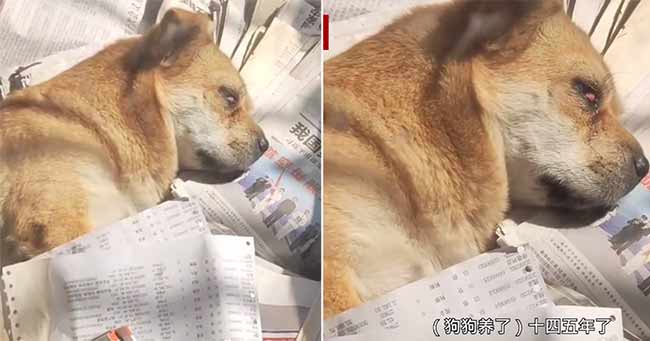 A heartbreaking video shows a dog waiting for its owner to return. It refuses to eat or drink and is caught on video lying inside a small room on a pile of newspapers and medical reports, unknowing that its owner has died. An insider said that the loyal dog has been with its owner for 15 years before his passing. The viral clip is posted in hopes of finding people to help the poor dog.

According to the netizen who posted the video, the exhausted and weary dog is seen lying in a small room on top of magazines, newspapers, and medical reports in its owner’s home in Guiyang, the capital of Guizhou Province in southern China.

In the video, which was recorded through a window, the dog appears limp and helpless as it lies on a pile of newspapers, magazines, and medical reports.

A neighbor told Xuanwo that the dog refused to eat food or drink water since its owner, an octogenarian, has passed. The poor dog had no idea its owner is never coming home.

“Since the elderly man died, the dog has not eaten food or drunk liquid, and has been lying in rubbish,” the local claimed.

“[The elderly man] had kept it for 14 or 15 years. It is so moving. Such a small animal has so much sentiment and devotion.”

An anonymous source revealed that the video clip is released in hopes of finding anyone to help the poor dog.