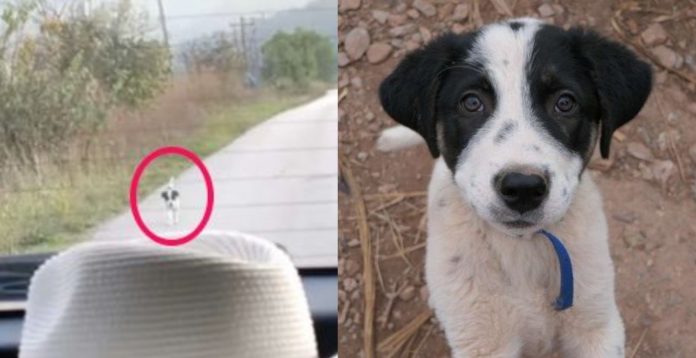 Since the beginning of time, dogs have always been known to be man’s best friend who lives to be loved and love us in return. Sadly, some of these furry pets get abandoned, and they will never understand why.

Valia Orfanidou happened to encounter one of them while driving down a road in rural Greece when a black-and-white puppy suddenly appeared from the bushes and started running after her car.

Fortunately, Valia noticed it when she looked at her rearview mirror. She soon realized that the puppy was abandoned, and it was chasing her car as if the puppy was waiting for someone to pass by and try to call their attention.

“I immediately thought, ‘Oh no, another puppy.’ Greece has between 3 and 5 million stray dogs. The streets here are like an open admission shelter, anyone who no longer wants their dog throws him out on the street, there’s no other option,” Valia said.

Valia rescues and shelters dogs in Greece and narrated their stories and her experience with them on her blog The Orphan Pet.

She instantly realized that she could not leave the helpless shepherd-mix in the middle of nowhere, so she decided to stop her car and tried to convince him to come in.

“When I stopped, he hid under the wheels of the vehicle. Every time I approached, he would hide, and when I went a few steps back, he would come out of hiding and bark at me like I was trying to say something,” Valia added.

After playing hide-and-seek with the puppy for about 10 minutes, Valia was able to grab him and put him at the back seat of the car. The dog immediately wagged his tail non-stop to show how happy he was to be rescued.

Valia immediately took the dog to the vet for a thorough check-up. Although the puppy could not find that much food on the streets, he was surprisingly healthy.

Currently, the puppy lives in a foster home in Athens where he is called Bandit. Although sometimes, Valia also calls him Bendito, which means Blessed in Spanish. The puppy is rapidly growing with the care of his foster mom.

“He’s independent and strong-minded. But very loyal and lives to learn,” Valia said.

Valia hopes that very soon, with the help of Second Chance Animal Rescue Society, Bandit will find a family that will give him all the love and attention he deserves.

If you are interested in adopting Bandit, you can send an email to Second Chance Animal Rescue Society.

To rescue dogs living on the streets of Greece like Bandit and find loving homes for them, you may make a donation to Second Chance Animal Rescue Society.

Share this story of Bandit, so he may find a home with a loving family.