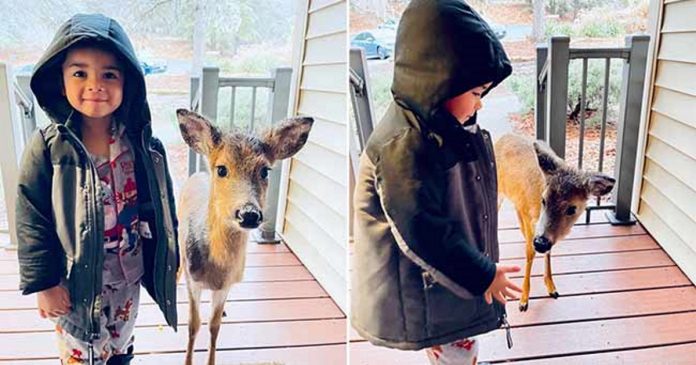 This story is a”deer”able. A four-year-old boy in the U.S. wanders into the woods of a national park and what he brought back home surprised his mother. The boy casually brought back a deer with him. Apparently, while in the woods, the boy befriended the deer and it followed him home.

Stephanie Brown was shocked to find her son Dominic, 4, and a baby deer he found in a nearby forest appear on the terrace of their cottage during a family vacation at Massanutten Resort in Virginia, USA.

His mother Stephanie managed to capture the adorable moment and shared it on her Facebook, where it went viral within a few minutes, ABC 8 News – WRIC reported.

Netizens who saw the photos were impressed by how comfortable the reindeer and Dominic were with each other.

Stephanie explained that her family had packed up to leave the resort in Massanutten and return to their home in Ragged Point Beach, Virginia, when Dominic showed up with his new friend.

A shocked Stephanie thought about what to do, took her phone out with minimal movements, and immediately took some photos of the two of them.

The photo shared on Facebook, which has since garnered more than 16,000 likes and nearly 20,000 shares, shows Dominic in Rudolph the Red-Nosed Reindeer pajamas, wearing Winter boots next to a baby deer on the porch where they are staying.

The pair looked very comfortable with each other, and the baby deer didn’t seem to be in a hurry to get back into the woods as he peered up at Stephanie with curiosity.

“I was shocked. I was like, ‘No way. My mind is playing with me’,” Stephanie told ABC. “It’s not like something’s weird to him, to me it’s very strange.”

You may watch the full interview from Stephanie’s Facebook page here.

The stunned mother quickly pulls out her phone to capture the unique moment. “They were very aligned,” Stephanie said, explaining that the deer tilted its head in the same direction as Dominic as she took the picture.

Later in an interview with ABC News, Dominic named his furry friend “Flash.”

When asked why, he replied, “No why.”

When the quick photoshoot was over, Stephanie told Dominic to walk his friend back to the woods which he did, so that he would be reunited with his own mother.

On Facebook, where Stephanie shared the photo, thousands of people were fascinated by the adorable image.