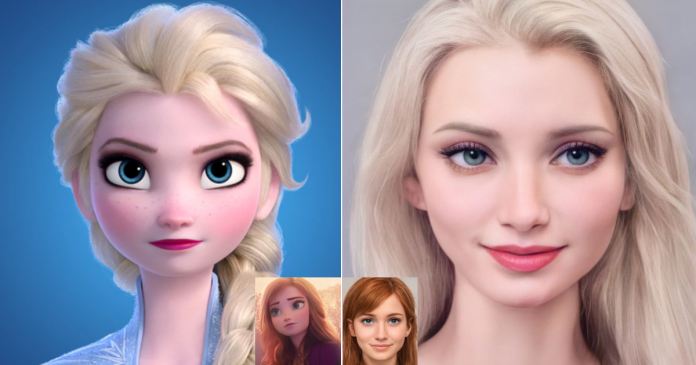 Most people, young and old, love to watch cartoons, may it be animated or computer-generated imagery (CGI). They have been part of our childhood days, making their way into our vivid imaginations. Some people have their favorite cartoon characters and wonder what it’s like to live like them. An artist who is known on social media and goes by the name Toyboyfan, used artificial intelligence to convert photos of ordinary people to real-life Disney characters.

“For these A.I. edits, typically I start off with a photo of a Disney character and a photo of a real life person who I think looks like said character, then I put the two into the A.I. program that I use to merge the two together. Afterward, the result can look a little funny, so I take the resulting photo and combine it with another photo and so on until I get a somewhat realistic photo that kinda looks like the character. Then I will take the photo to Photoshop and start making tweaks here and there to make it look even more like the character, like changing the eye color or refining the face,” ~ Toyboyfan/Instagram, A.I. artist

Tiana has very profound features and noble temperament. The human photo of Tiana, same as the animation, live out the great beauty of a princess.

Whether it is the charm or the shape of her face, there is a certain degree of similarity! People agree that the real Moana would look like this.

The model’s mouth up to his chin is similar enough to the character. The artist made very minimal restoration on the photo.

The real version of Elsa‘s hair and eyes are as good as the animation!

Anna‘s vibrant features manifested in the photo of the human version.

The model turned out to be the perfect real-life version of the Queen. The hairstyle and the charm of her face were perfect with minimal restoration, too.

The animated photo and the real-life version appeared to be like they were twins! Unbelievable!

Toyboyfan’s Instagram account with these photos has gone viral, and netizens believe that this artist can create wonderful stories and worlds with his art. What do you think about these edits? Maybe you would like to see Toyboyfan do a specific character? Don’t forget to show some love to the artist, as he creates many amazing art pieces on his social media. You may check out more of his eye-catching art here on his Instagram account.

Toyboyfan is a college student majoring in graphic design. He loves playing video games in his spare time, especially Minecraft. He mentioned that he was inspired to be in the arts for as long as he can remember.

“Ever since I was a kid, the behind-the-scenes features of movies, especially of animated movies, fascinated me. It has always amazed me how a whole world could be created by starting with a blank canvas. Thankfully, I have a really supportive family who have helped me get to where I am today.”

“As for how the idea came up, I initially wanted to create a real-life portrait of Kristoff from Disney Frozen, just to practice my editing skills. I posted it to my Tumblr and suddenly everyone asked for me to do the other Frozen characters. Once I did the others and posted that, I started seeing the photos being reposted all over the internet, many people being amazed by them. I then noticed that they were wondering if there would be other Disney Princesses, so I decided to start creating them as well.”

It takes the artist about an hour to create one edit, depending on the character. He shares why he chose to do Disney: “Because I have seen so many different versions of Disney characters in real life, I always wanted to try to do my own version of that concept. My favorite part about creating art is getting to see the final result after all the time and hard work I put into it. My least favorite part is how long it can take to create a work sometimes,” shared the artist.

This boy always come home with dirty clothes and his parent...

This is how a 3D BMW cake is made