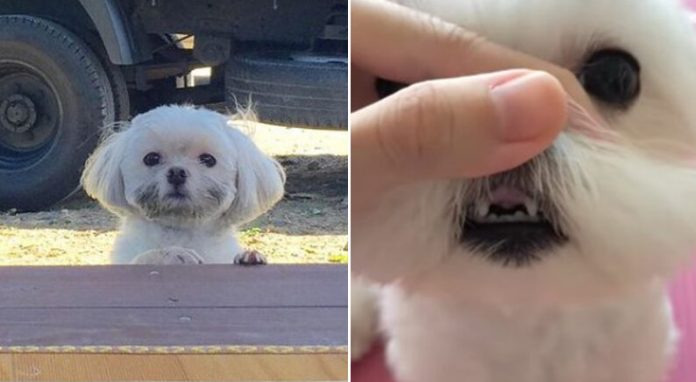 A beautiful white-furred small dog with round eyes like marbles became famous when he was fondly called “construction dog” due to the charcoal black dirt on its face after a day of play. Netizens who saw his videos on YouTube grew fond of the little dog.

Jae-rong’s guardian shares his daily activities, which shows how very active he is even when he is alone, through social media and YouTube.

On the 17th of March, a video was released on a YouTube channel called ‘JaelongZanchi’ under the title of ‘A dog who doesn’t know he’s missing his front teeth’.

The guardian slightly pushes up the lips of the playful dog while he was sitting quietly.

4 of his upper front teeth were all gone, revealing her empty gums.

The guardian, who admitted to finding this cute, once again raised his nose and showed its empty gums while she laughed.

The dog, in return, did not show any reaction if he was annoyed or just fine.

The guardian said, “Two years ago, his front teeth went missing. When they fell out, I started to wonder, ‘Is my baby old? He is only 6 years old, is he aging fast?” She explained, “‘How would he eat when the other teeth fall out?’ I remember worrying too much at the time.”

She continued, “In the vet clinic, I felt confident because, according to the doctor, the front teeth do not have special functions and there would be no problem with his daily life. The fact was, his mother also had the same trait of having missing front teeth, so the vet thought it was all hereditary.” She added, “It was actually very cute!”

Viewers said, “Jaelong has missing front teeth, when I saw it, it broke my heart.”

“He was cute even without the front teeth.”

“It’s like a kindergarten baby with missing front teeth,”

“I don’t have to worry, he still is having fun,” another netizen said, hands on chest.

In his photos, he was caught eating a roasted sweet potato, running around while playing at a construction site.

She says that the little fellow who loves going to the country very much is always running about enough to have his face charcoal black dirty wherever he goes.

The guardian conveyed her affectionate wish, “I wish he could live the best life and do whatever he wants to do wherever he goes.”