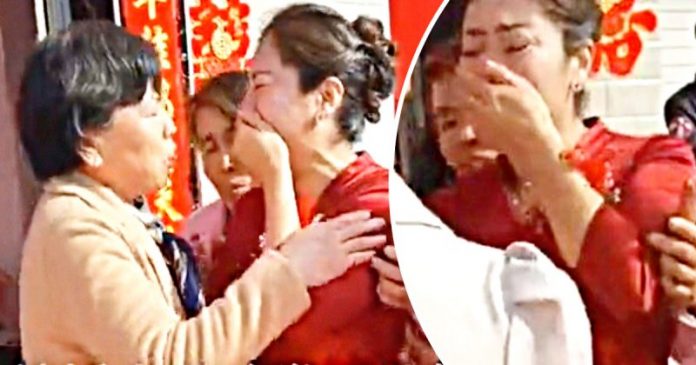 The reunion of a mother and her biological daughter during her own son’s wedding ceremony is like a drama story we have watched in the theaters, but that has been the fate of a woman when they finally were reunited in the event.

While attending her son’s wedding ceremony in Suzhou, China on March 31, a woman suddenly realized the bride was her daughter who had been missing for more than 20 years.

According to a World News 8 report, the woman saw a birthmark on the hand of her future daughter-in-law, which she knew very well because she knew the physical characteristics of her own biological daughter she missed.

The mother realized that the birthmark on the hand of the bride had a striking resemblance to her missing daughter’s because it was quite unique and unusual in shape. The bride, who was younger then, has been accidentally missing on the side of the road over 20 years ago.

Suspecting the bride could be her long-lost biological daughter, the woman asked her brother-in-law whether the bride was their adopted child.

Oriental Daily reports, the question has shocked the bride’s family, as they have never divulged this secret for years.

The bride’s parents revealed at the ceremony that they had found a toddler on the side of the road over 20 years ago, and since then they have cared for and educated her as their own daughter.

Upon hearing the news, the overwhelmed bride spontaneously burst into tears because she realized she had finally found her birth mother.

According to an Oriental Daily report, the reunion of the mother and long-lost daughter then ended into a more joyous event than the wedding itself.

However, the fate of both sides turned out to be a blessing, as the marriage did not suffer from blood and hereditary problems nor did it need to be annulled, as the bride and groom were not siblings by blood.

According to Oriental Daily, the bride’s biological mother has been trying to find her missing child for years but to no avail. As a result of the frustration with the search, the mother later took a boy as her adopted child.

The fate of the newlyweds, and the accidental encounter between the mother and the long-lost daughter feels a bit strange, the woman’s biological daughter and the woman’s adopted child have met and fallen in love and are now husband and wife.

Her adopted son had married an adopted sister, and the bride was now a daughter and at the same time a daughter-in-law to this woman, the two just kept calling her mother. Kind of a drama, but true enough, this is a TRUE story.