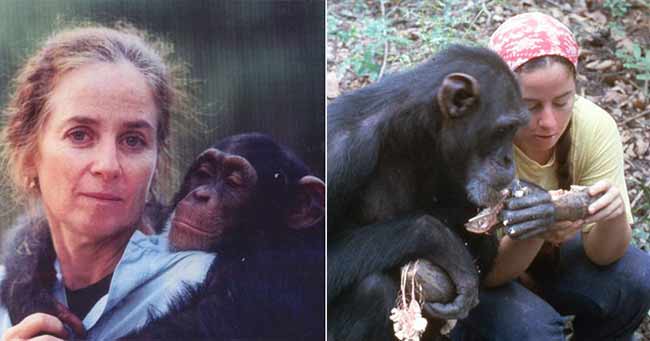 She has devoted a decade of her life to caring for Lucy the Chimp. But in an instant, Janis Carter knew her friend no longer needed her guidance. Lucy hugged her then quickly turned around and rejoined the other chimps in the Gambia Forest.

Recalling the day a new documentary was about to take place, an emotional Janis said: “We took care of each other and talked, then she grabbed me and hugged me very tightly.”

“It felt so intense, unlike any other hug we’ve had before,” Janis continued. “I know, Lucy still loves me, that’s very, very clear, but she doesn’t need me anymore now like she always needed me at first.”

Janis, now 70, has spent more than six incredible years in the rainforests of the Gambia – with almost no human contact – teaching Lucy to go wild.

In 1976, when Janis was 25 years old, she attended her first encounter with a chimpanzee that had changed her life… chimpanzees raised as humans in an experiment by psychotherapist Maurice Temerlin and his family in the US.

“He asked me to take care of her,” said Janis. “It was a very special moment for me. That is our moment.”

As soon as Janis began to enter Lucy’s cage, they began speaking in sign language.

Lucy knows 120 signs, she sleeps on a human bed, and can serve tea to guests. But she had grown up and began to get out of control in the house.

When Maurice and his wife Jane decided to send Lucy to her natural habitat in the Gambia in 1977, Janis took part. The process was expected to take weeks and Temerlin returned home after two weeks. But Janis never came home.

First, Lucy lived in the Abuko Nature Reserve, but she still can’t adapt to the forest conditions.

In May 1979, Lucy was moved to a remote island uninhabited by humans. Janis decided to join in with her. For her own safety from local leopards and hippos, she slept in the stable with Lucy and eight other chimps.

Even though there was no electricity or running water and the newspapers only came every six months, Janis stayed for more than six years. Forced to decide whether to leave Lucy suddenly made her “realize the depth of her feelings for Lucy”.

Without training, Janis said she learned by “trial and error” and said, “Whatever I think the chimps will do, I’ll try to do it myself.”

She had abandoned her boyfriend and her career as a teacher, and it was difficult.

Janis said: “I thought, Lord what am I doing? I opened vacancies for people who wanted to work with me and some of them have already answered.”

“The chimps here have lost their minds, this place is like a small world to them. They don’t want anyone in this place. It leaves me, alone, completely alone with them. No one can replace me here. This makes my need as a social being to make contact with other humans not fulfilled.”

“My relationship with Lucy is like a friend. My feelings for Dash [another chimp] are more like mother-daughter. I don’t know if humans have ever been chimpanzees but what I do know is that there are some of our personalities and cultural tendencies that are quite similar to theirs.”

However, the prolonged loneliness and slow development of Lucy at one point made Janis very tired.

Lucy eats the leaves after seeing Janis’ teachings on foraging for food. “Lucy knows me very well, she’s sensitive to moods,” she said.

Perhaps this was the point where she realized that she had to start getting used to her new environment. But there was a lot more to be done, otherwise, Lucy wouldn’t have been able to survive without Janis.

“She has to integrate socially with other chimpanzees but on the other hand she wants all of her emotional needs to be met by me,” said Janis. “So I have to deliberately leave her alone first until she looks for someone else to meet her needs.”

The method worked, Lucy bonded with Dash (another chimpanzee) who looked “excited” convincing Janis that it is time to leave.

“She was jumping up and down,” she said.

After hugging for the last time with Lucy, Janis returned to the island one year later.

During her last hug with Lucy, she then got up and walked back to the other chimps.

“After going through all kinds of hardships, I couldn’t believe that in the end, I had to part with Lucy, but she finally succeeded, that’s what we all wanted,” said Janis.

Lucy died the following year in 1987, but Janis remained in the area.

There are now chimpanzee sanctuaries on the islands of the Gambia where 140 rare animals live in freedom.

Here is a video of collected images of when Janis and Lucy were together.

Here is a video of a trailer when HBOmax released a documentary entitled Lucy, the Human Chimp: