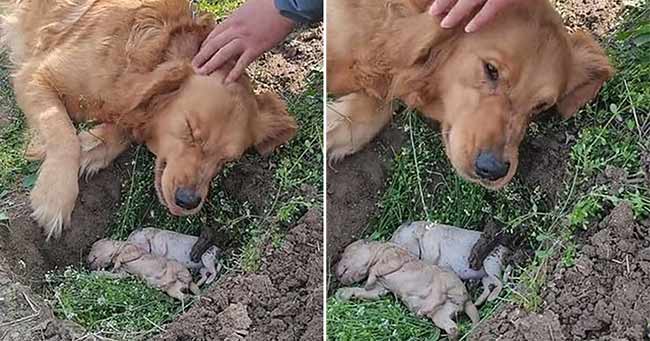 In a heartbreaking footage, a mother dog is seen digging up the graves of her puppies and trying to take them away. The incident occurred in Suzhou, Anhui Province, China, when the puppies developed complications at birth.

The owner, Qin, said two puppies died at birth, and the mother then dug her puppies’ graves again five or six times.

In the first scene of the video, one of the dead puppies is seen in its mother’s mouth. The owner then consoles it and tries to get the puppy out of its mother’s teeth.

The second clip shows the mother licking the puppies’ bodies as she digs up the graves.

The mother dog cries and the owner tries to calm her down.

In the third scene of the video, the dog is seen walking with one of her dead puppies in her mouth along the way.

At the end of the video, Qin tried to grab the puppy that was in its mother’s mouth.

It is unclear if any of the other pups survived the dog’s birth.

Here is the video: (Warning: Watch with caution. Video contains images that may be upsetting.)