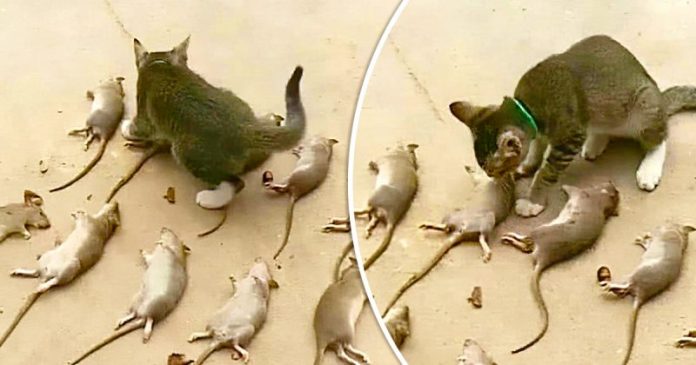 Besides their entertaining and funny antics, pet cats usually have their own “activities”. It is in their nature to catch rats around the house, and without being told, they quickly get the job done. One owner shared a story about his beloved cat who seemed to be very unique in carrying out his ‘task’ of catching mice.

At first, the owner only adopted the cat to be his companion at home. He never thought of teaching his cat to catch rats or do other things.

One day, his mother in the village called him to borrow his cat to catch the rats in her house. The owner initially disagreed. He didn’t want his pet cat to do such dirty work. However, after being urged by his mother he reluctantly agreed.

He then brought his cat to his mother’s house and at that point believed that his cat would not be able to do what his mother wanted.

However, his suspicion went down the drain. The cat was very ‘professional’ in catching rats at his mother’s home. His mother sent a picture showing the ‘work’ of the cat.

His cat not only managed to catch a large number of mice, but it organized its catches as well by arranging them in rows!

It turns out that the cat was really great at catching mice, and organized. Although before this the cat had never done any mice-catching work at its owner’s house, when he was asked, the cat did the work efficiently. The owner was proud to have such a unique and talented cat. The best, indeed!

If you have a pet with a unique talent, share their stories in the comments.

These lambs are so cute and adorable in this video compilation—look...