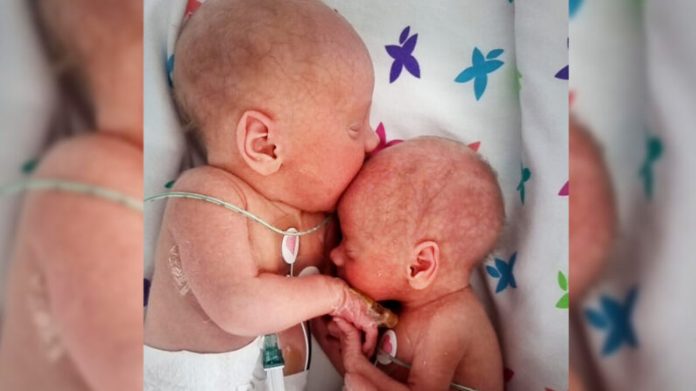 A premature twin, born much smaller than her brother, was separated from him at birth for health reasons. But after successful treatment, the twins were reunited and their parents took incredible photos of them cuddling for the first time.

Parents Laura Hough and Chris Carey, of Walton, in the north of England, had been told that baby Neve might not survive. The placenta was deteriorating. Because she was smaller, Neve suffered from poor blood circulation and was not getting enough nutrients while still in the uterus.

“They wanted [Neve] to be born at 28 weeks, so they were monitoring her blood flow,” Laura, 27, told the Liverpool Echo newspaper, “and since everything was stable they postponed the birth to 30 weeks. “

Neve and her twin brother, Louie grew up in separate bags. Louie’s development was normal, but due to the risks posed to his sister’s survival, Laura was admitted to Liverpool Women’s Hospital for an emergency Caesarean Section delivery on March 8.

Baby Louie weighed 1.45 kg. when he was born. Neve weighed only 652 g., but she did well with a struggle and without even needing to be plugged into an oxygen source. “She’s smaller than a baby doll, but she’s doing well, it’s amazing,” said Laura.

Surprisingly, it was her twin brother who ended up needing medical assistance.

“It was Louie,” explained the mom, “Both his lungs collapsed because he had air in them. So he ended up receiving treatment to drain the air from his lungs. “

The doctors decided to separate the twins so Louie could receive emergency treatment. It was not until two weeks later that the babies, still dramatically disparate in size, were brought together and placed side by side in the same incubator.

Photos taken by the new parents show Neve and Louie tenderly hugging each other’s arms and legs, kissing and shaking hands. The father shared the heartwarming reunion on a Facebook group page, where the photos went viral.

“It was horrible when they were separated at birth, but I cried tears of joy when they found each other,” Laura told the BBC. The new parents and their extended family hope to welcome the babies home in May.

Laura said her doctors had never seen a baby like Neve – so small, but strong enough that she didn’t need medical intervention. “They said they will miss [the twins] when they leave,” she added, “because they need more little fighters like them to continue to inspire them in their work.”

Congratulations, Laura and Chris, and their twins, Louie and Neve! ❤️