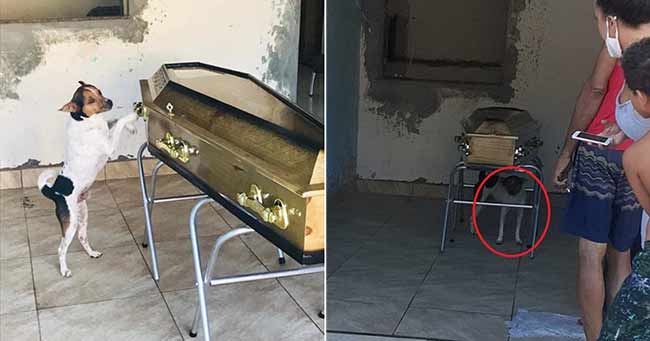 Our life sometimes gets better when we live with a pet, specifically dogs. Their presence makes things seem easier. They can fill us with love that is pure and unconditional, even capable of crossing the boundaries that distinguished them from the rest of the world. The following story tells us about the degree of loyalty that a dog, as our pet, can reach.

It’s about a puppy in Brazil named Toy, whose owner died and he doesn’t want to leave the coffin, where the owner’s body laid. He even howled and cried for his best friend’s departure.

“He was crying like someone who had lost someone he loved so much,” said the owner of the funeral home that day.

The moving scene was captured by Jailson Almeida, owner of a funeral home located in Camaçari, Bahia. And, the extraordinary friendship between Toy and Dona Luzinete Lopes Diniz, a kind-hearted woman, known and loved in her neighborhood, went viral.

Doña Luzinete died of a heart attack. But, among the many people who loved her and were present to offer their final goodbyes, there was one being who had especially expressed all his affection until the end of the ceremony: Toy, her pet dog, but already like her own son. He understood that this day would be his last chance to be with her beloved mother and he wanted to make the most of that time.

“It was a show of gratitude and respect he deserves for the person he loves, he doesn’t want anyone to come close to the coffin,” added Jailson.

In addition, the man described how people around him were surprised at the puppy’s reaction, he did not want to let other people get close.

He howled in despair, he seemed to be in great pain at the loss of his beloved Dona Luzinete. The moment was very unusual but also very beautiful.

They all witnessed that the noble animal refused to part with his beloved Luzinete to the end, it was because she had poured out her love for Toy so much when she was still alive, which every pet deserves.

Adorable moment beavers having fun rubbing plump cheeks as if in...