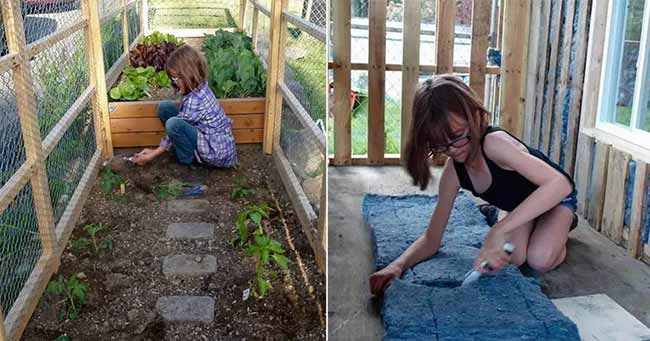 Nowadays, the world seems to be becoming more and more uninterested in reaching out to each other. Most adults complain about the lack of care and love for one another, but in fact, they also don’t want to share their love with other people, for fear of losing their loved ones and some don’t feel like helping others, locking themselves away from the world. However, with children, situations may be more different.

Hailey Ford lives with her parents in Washington, USA. Four years ago, one day on her way back from the shop with her mother, she met Billy Ray, a homeless man who had not eaten for 4 days.

Hailey then asked Billy to chat and she found out that Billy Ray was a veteran, he lost one leg during the war and couldn’t move freely, couldn’t work to support himself, so he was left homeless.

Little Hailey was only 5-years-old at the time, but the kindness she displayed was enough to embarrass many adults.

She begged her mother, and said: “Can I buy him a sandwich? Please, mom…”

The mother granted her little daughter’s request and helped the homeless man. He felt Hailey was like an angel. Since then, Hailey started helping more homeless people by giving them free clothing and food.

But after a few days, her mother apologized to Hailey, “My dear, we are not such a rich family and can’t help everyone.”

Hearing that Hailey looked sad and crying, she was very worried about the life of the homeless person who had become her friend.

Hailey thought about what her mother had said, and coming to a decision she said, “If I can’t afford food, then I’ll grow my own fruit and vegetables for them!”

Of course, Hailey’s parents were doubtful at first, but became quite supportive of this method of independence, too. When a lot of kids hated fruit and vegetables, Hailey started planning her own “farmer’s life”.

A little girl who has never had any experience with plant cultivation can only learn this knowledge by herself. After finishing her homework every day, she started teaching herself with a professional planting book.

If there was anything she didn’t understand in the book, Hailey would consult her grandfather. Her grandfather taught her the method on how to grow a vegetable garden in narrow land, which is suitable for small-scale but intensive planting methods. Despite their small size, the distance of planting seeds is extraordinary.

Every vegetable had to be turned carefully, dewormed, and watered …

After a month of hard work, Hailey’s hard work finally paid off: half a bag of carrots, potatoes, soybeans.

Hailey gave them all to her friend Billy to taste. Even though the harvest wasn’t very good, it was enough to make this kind-hearted girl happy!

A few months passed, Hailey was harvesting more, including half a bag of blueberries, one bag of nuts, and okra! She smiled cheerfully at her harvested vegetables because this could make homeless people eat several meals!

Hailey’s little kindness in growing vegetables every day moved the hearts of the people in her neighborhood, they joined her in her vegetable-planting operation and also divided a part of their own yard.

Hailey’s neighbor’s sister also helped her weed and irrigate the vegetable garden when she was not at work.

With the community’s support for Hailey, her vegetable garden has grown even bigger, almost all over the city!

The harvests are getting better and better, and the variety of fruits and vegetables is even more abundant .. Cucumbers, tomatoes, broccoli, strawberries, lettuce… all of which can be found in Hailey’s vegetable garden.

Every time the vegetables were harvested, Hailey would take a small scale to measure them by weight, then improve her own way of planting even more. Truly, Hailey is a quality farmer by heart.

Hailey washed and packed every serving of fruit and vegetables, and distributed them to the homeless on the street at regular intervals.

Many homeless people in the city have been helped, and they were very touched. They have also become good friends with Hailey, and spontaneously help Hailey manage a vegetable garden on weekdays.

Even though there were vegetables that hadn’t been ripe for a while, Hailey would carefully make them into pickles.

There is a “slum” in the small town where Hailey lives. This was a place the residents were reluctant to go to, but Hailey came over to distribute food. She was welcomed and respected by everyone there.

The homeless on the streets no longer have to worry about eating. They also learn to grow on their own to improve their lives.

Then Hailey found the problem again: the homeless were still sleeping on the street. So she said to her mother: “I think they should have a house.”

The very persistent Hailey with another desire made her think of a new idea: “I want to try building a house.”

Hailey was determined to do so, she started studying for a few days, and drew simple house designs. Then she immediately found a wooden slat and tried to tamper with it in the backyard.

Hailey is accompanied by her family to the building materials market. After the store owner learned of her purpose, he was very touched and decided to sell it for half the price.

Hailey researched for a lot of information and learned how to build a simple and eco-friendly place, which is to use denim as a wallboard coating, which is very warm.

Every family in the city was very supportive, they also provided as many construction materials and denim as possible for her.

While the other kids are still playing with building blocks in their house, Hailey has taken various electric drills and screw locks to build a house with real tools.

Every detail was measured individually, even though she got dirty at the end of the day, Hailey didn’t care. After hard work, the wooden house was successfully built. Warm and tidy, it even looks luxurious!

On the day that construction was finally finished, about 23 neighbors and even strangers came to Hailey’s house to work together and help her lift the house to where it was needed.

Hailey has built 11 wooden houses, and everyone in the community comes to help her. As one saying goes: “If you really want to do something, the universe will help you.”

Hailey has a slogan: “I can’t help everyone, but love can!” With his love, wisdom, and courage, she has made “achievements” that many adults cannot. Over time, more and more people are realizing: “Love is truly something extraordinary.”

We often say, “Give someone a rose, and his hands will always smell good.”

Today this 9-year-old girl believes in the power of kindness and still helps others. She helps the underprivileged in this city with her actions and makes the adults realize that the slightest good deeds can make a lot of difference.

May you be blessed abundantly, Hailey Ford!

This Chinese Family Decided to Workout Together to Live a Healthy Lifestyle; 6 Months Later They Are Almost Unrecognizable!

This Filipino man had severe leg injuries after an accident in...