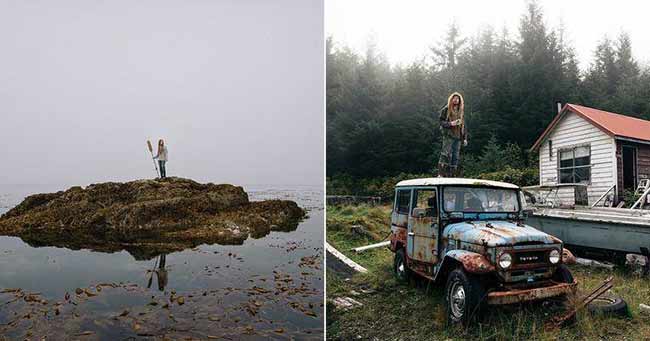 Marble is a small island in southern Alaska, and its location is very isolated from the mainland. Only helicopters and boats can reach the island, and it is a 2-hour flight from the nearest town, Ketchikan.

Six years ago, Zach moved from Japan and lived on the small island of Marble. Apart from him and his dog Kahli, there are the island owners, Eric Wyatt and his wife, Cindy.

The Wyatts own an oyster farm on this small island.

‎Zach spends half his time working around the house every day.‎

On the other half-day, he goes to work in the oyster farm, and he observes the growth of the oysters so that he can sell them on time at a good price.

The waters around Marble Island are very popular with whales, so the view of the whales swimming is easy to see.

Zach is always accompanied by whales and black bears that roam around the island.

Zach’s isolated life has been captured by a photographer, Anze Osterman.

“When the plane landed on the edge of the island, the first and only person I saw was Zach. I’m very lucky to have found someone like him,” said Osterman.

In providing food, Zach and the Wyatts will grow vegetables, fruits, and other necessities around the island. The meat they eat usually comes from halibut, deer in the forest, or farmed oysters.

Every two months, Zach and Eric would go to the mainland to buy fuel, which was their only source of energy for lights. At the same time, they will buy some necessities that they don’t get on the island.

At first, photographer Osterman still wondered how Zach could live in this isolated environment. Later, he fully understood it, “Here, one can be so carefree and can accurately find one’s value and sense of being.”

Many people have resorted to isolated living, and most of them have no qualms about their chosen state of peace. I wonder how many more will resort to this lifestyle in the future…

8yo boy keeps his hair long for a good reason despite...