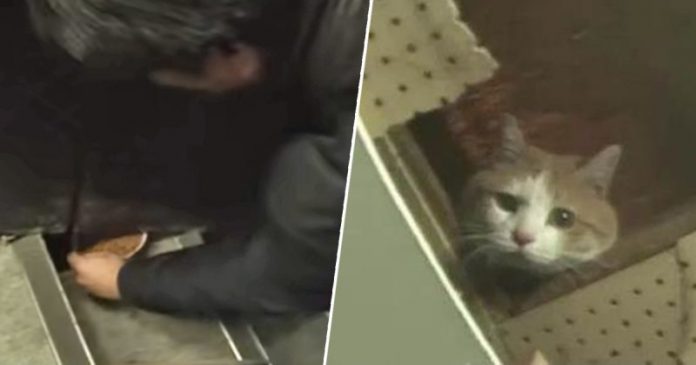 Similar to homeless people, stray dogs and cats roam the streets in search of food just to survive. Some strays hover at some places expecting some passersby to give them scraps of food.

On the other hand, animals in the shelter feel that they are safe, just like a cat that was living behind the walls of an underpass.

It happened in South Korea, where the matter was noticed by a young man. He has observed that every time he goes through the underpass, there was something “moving” behind the walls.

Convinced that it may be a cat, the young man gave the “mysterious animal” some food for two years without really seeing what was behind the walls.

The underground pass is usually busy with people from all walks of life coming through. Most of them have observed the young man leaving food inside the wall frequently.

Using a screwdriver, he would pry open at the bottom of a wall where he frequently hears the sound of the “mysterious animal” passing by. He would leave a bowl of food and some water inside the wall he opened.

After leaving the food and water, the wall is again closed using the screwdriver. “I can hear it, I can hear its sounds when it comes,” the young man said.

The man is convinced that the animal behind the wall is a cat, while some passersby say that it may be a giant rat. “You give food and water for rats?” asks the skeptical passerby.

The story of the man leaving food for the “mysterious animal” behind the walls has caught the attention of a television program that eventually wanted to unravel the mystery behind the animal living in the walls.

To satisfy everyone’s curiosity, the station then installed a camera inside the wall where the young man heard the noises. Everyone waited, wanting to find out what the animal was.

After some time, a furry object appeared on the installed camera, which was set to night vision. It was bright colored and everyone recognized it as a cat’s palm!

“I was right all along, wasn’t I? It is a cat!” said the young man who got so excited. It turned out to be an orange and white tabby cat happily living behind the underpass walls courtesy of the young man’s food and drink.

There are no updates if the man adopted the cat, or if it still lives behind the underpass walls.