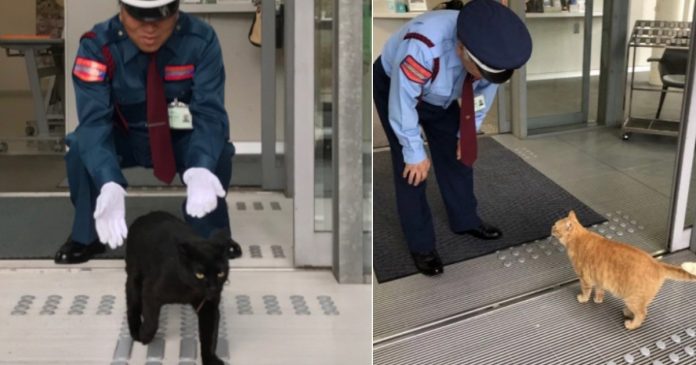 For many decades, people all over the world interested in art, history, and culture enjoy visiting museums, either with family or friends. Before the pandemic hit globally, educational field trips from various schools were frequent and museums around the world became headlines on the news. A Japanese museum, in particular, the Onomichi City Art Museum, has been having two unusual feline guests who want to enter the establishment for their cat photography display.

For the past years, the two cats have been attempting to enter the Hiroshima Onomichi City Museum of Art.

In 2016, the museum held a cat photography exhibit. According to SoraNews 24, the two cats have been trying to enter the museum, hoping to enjoy the beautiful art displays, as well.

Here is the first furry visitor of the museum.

The furry visitor was shunned away by the museum’s security guard at the doors.

After a year, the same cat came back and tried its luck again. When it tried to enter, it was shunned again.

Here in the photo, the cat is seen waiting outside the museum door, preparing its chance to enter the building. Sweet revenge, my friend.

The black, furry cat may have failed its attempts, but another tabby cat tried its luck to enter the establishment.

With confidence, it walked towards the museum doors.

The tabby cat was not successful either. Though at least, the security guard gave it loving head rubs before he sent it on its way.

The two furry felines gained internet fame since then, and the museum decided to manufacture merchandise to represent the furry duo.

After all, it’s the least they could do to honor the determination of the two furry creatures.

The frequent visits have since made the cats quite popular with the security guard and museum that they’ve both been named Ken or Ken Chan (black cat) and Gosaku or Go-Chan (ginger cat).

It is still unclear to this day if the two cats were finally allowed into the museum or not.