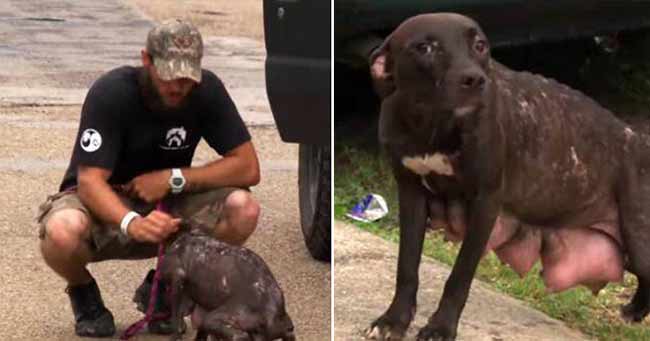 A mother’s love for her child, may they be humans or animals, is the strongest instinct ever known. Mothers will always protect and look after their children, which is incomparable to anything else in this world.

The story took place in a small town in Spain when a stray mother dog seemed to be in trouble. She would bark at anyone she saw would pass by.

The mother dog’s mammary glands look swollen, which did not seem normal.

A concerned citizen noticed this and immediately contacted the relevant parties.

Shortly afterward, rescue workers arrived at the scene, and the concerned citizen immediately approached the staff. Officers who saw swelling in her mammary glands suspected that the dog had just given birth.

Officers wondered why this dog was roaming the streets alone and there were no puppies to be seen.

After the officers put a leash around her neck, the mother dog immediately directed the officers to follow her and led them to a house.

At the door of a house, the mother dog stopped and barked.

After the officer asked the neighbors about the owner of the house, he found out that the dog was the family’s pet.

She just gave birth to her puppies and then got dumped outside.

Officers knocked on the door to negotiate with the owners and explain their intentions, hoping the owners would return the puppies to their mother, but they refused.

At that time, the mother dog looked very worried, standing at the door restlessly.

But because the owner’s attitude was very strict, the officer encouraged the female staff to negotiate again.

The female officer explained that she only wanted to take the dog to the rescue post for treatment, and would not bother them again.

After negotiations, the family finally approved and the officers immediately went into the house to take the puppies.

It turned out that the mother dog had four puppies, and they had not been fed for a long time. Two of the puppies looked weak, and the other two puppies were in good condition.

The mother dog was very happy to see her puppies, she went over and immediately gave them breast milk.

It appears that the puppies were deprived of milk to drink for days.

Fortunately, the mother dog is smart and asked for help to save the puppies.

What’s even more amazing is her incredible motherly love for her babies, and did not give up asking for help until she encountered these kind people to help her rescue the babies!

The Savitsky Cats wows the audience and the judges with their...

Black labrador enjoys splashing and swimming in her plastic pool to...