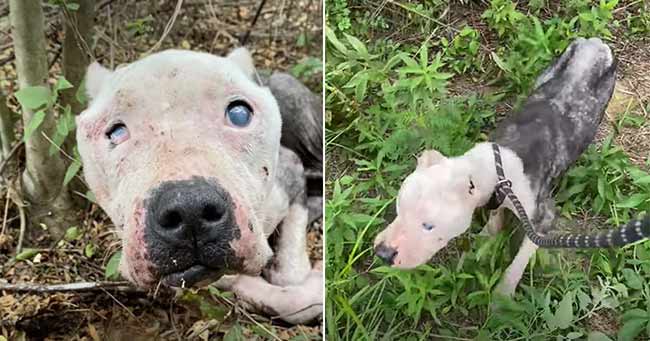 There is nothing nobler than making this world a better place, especially for animals, domesticated or in the wild. More often than not, when animals are in danger and needed saving, there is a force that drives us to rescue them.

One of them is this amazing woman on staff from Lucky Dog Refuge in Stanford City, Connecticut, in the USA who found a dog in a very pitiful condition.

This furry fellow named Halo lay curled up in the forest. Her gaze was completely gone, which showed that she was blind. Not only that, but she was also hungry. Fortunately, the goodwill of their group allowed Halo to have a new life.

Halo was really in a pitiful state. But after getting a little grooming, lots of love, affection, and some ice cream from McDonald’s, the dog got up and started showing her true self.

According to local media, the animal was left in the forest without food, and was probably just waiting for death to finally stop its suffering. Her blindness can be seen from her milky white pupils.

One of the volunteers tried to cheer her up with food so she could get up on her own and leave with them. When she woke up, they realize why she’s so weak: Halo is just bone and skin.

They gave her the name was Halo, “aureola”, in Spanish. The rescue team finally decided that if it was impossible to save her, they would put him to sleep with dignity. She had suffered too much to endure, and they thought it would be unfair to prolong her pain.

“We decided that if it was not worth it for her to suffer more than she is suffering now, if necessary, we will have to euthanize her,” said a rescuer.

But a miracle happened, Halo began to develop little by little and recovered, with all the possibilities to return to a normal life. She was admitted to the shelter to begin her medical treatment.

According to Stacey, her adoptive mother, Halo’s health was very fragile when she arrived, but no one at the shelter hesitated to help restore her health.

As soon as she could start to move, Halo leaned against Stacey, showing great pleasure in feeling the affection of a human warmth she felt before. Hugs, kisses, caresses, and a little more happiness in between them.

“The dog is making progress in her recovery and has turned out to be very playful, loving, and intelligent, despite her visual impairment. She loves to devour her ice cream lying on her favorite couch,” added her nanny.

This is good news for all animal lovers. We love to see how other lives are saved by a group of volunteers, who are completely devoted to looking after the welfare of the animals. Amazing, isn’t it!

Using social media to reach out, we try to do our part, not only helping the animals along the way but also raising awareness in people so that the little things can be done to multiply and produce global change.