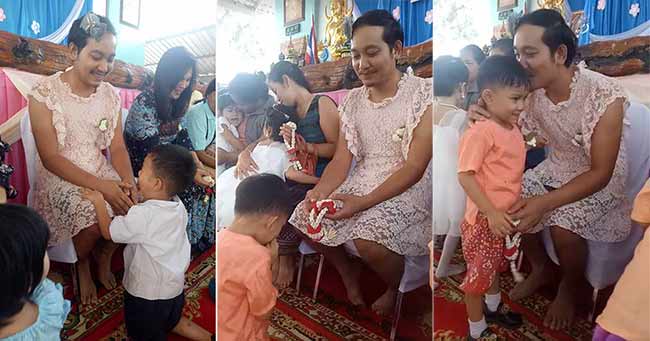 In Thailand, August 12 is Mother’s Day. On that date schools always hold celebrations to pay homage to the mothers of their students.

A school in Kanchanaburi, Thailand held a tribute to mothers at a Mother’s Day celebration. For his two children to participate, a single father wearing women’s clothes attended the celebration.

In this annual celebration, a school in Kanchanaburi has been stirred up by an unusual mother – she has a beard and mustache.

Chatchai Parn-uthai, a single father of two children, wore women’s clothes to participate in his children’s school activities so that they do not feel inferior because they do not have a mother.

Chatchai has shared pictures of him as a “mom” on social networks and wrote: “I am a single father with 2 kids. I will do anything for my children.”

Some netizens even uploaded videos of Chachai participating in the event. In the picture, Chachai is wearing a pink lace dress with a Hu bow-knot hairpin, sitting on a chair and receiving a bouquet from his son, and receiving a thank you note from him.

Although his son was not used to seeing his father in women’s clothing, it was evident that his son was overjoyed by his presence and efforts, and for that, he kissed his son’s forehead after the honor ceremony.

It was reported that 32-year-old Chachai had separated from his wife 3 years earlier, at that time they had two sons aged 3 years and 5 years.

Chatchai confessed that he “turned into a mother” for 1 special day so his children could participate in the school’s Mother’s Day activities.

“I don’t want my children to feel inferior, but I also hope they can be happy,” he said.

He sat on the chair to greet his kneeling son and thanked him. After his son’s greeting was over, he gave his son an affectionate kiss on the forehead.

After the photos and videos went viral, he became a heart-warming sensation, so the media went to meet the father for an interview.

The reason for playing the role of a “mother” in the event is so that her children can participate in the activities.

When asked if he wasn’t ashamed to wear women’s clothes, the loving father said he didn’t want his children to feel “left out”, and wanted them to be happy.

“I really love my children. As long as I see their smile, I already feel very content,” he said.

This father’s action really moved everyone. For the sake of his children’s happiness, he is willing to do anything. All children will be proud to have a father just like Chatchai!

Dog with Large Tumor Surrendered by Owner for Lethal Injection; She...