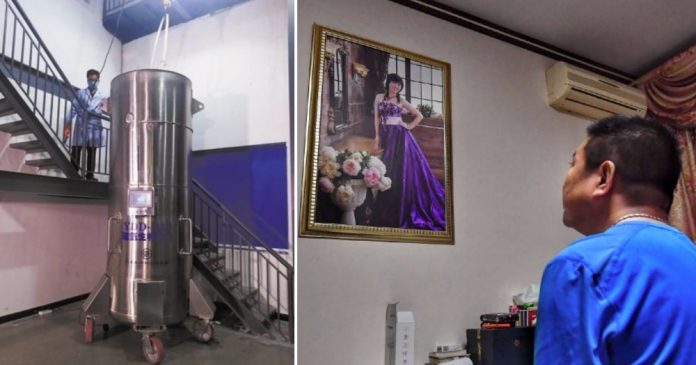 Is this true love? More often than not, it is really quite hard for us to let-go of a loved one. Some people have heavily accepted that they are gone when some find it difficult to accept it. A man in Shandong has been freezing his deceased wife for 4 years now, in hopes to revive her one day.

Zhan Wenlian, from Shandong, China, died of lung cancer in May 2017, aged 49. Mr. Gui was reluctant to let his wife go and would not want to see her cremated. As Zhan was on her deathbed, Gui came across human body cryogenics. Ms. Zhan’s body is stored in liquid nitrogen at minus 196 degrees Celsius.

According to Wikipedia, Cryogenics is the science of using low temperatures either for treatment or preservation. It provides an interesting area of study for researchers who wish to examine the materials as they transition from gas to liquid to a solid-state.

After doing his own research and discussing the technology with medical experts, Gui decided to seek an answer from his wife. By that time, Zhan’s cancer had already spread to her brain. She could neither express herself nor control her facial muscles.

Gui asked his wife to squeeze his hand if she agreed to undergo cryogenic preservation.

“Of course she agreed,” he told China Press. “Otherwise she wouldn’t have squeezed my hand.”

Gui also told Zhan: “You just have to go to sleep for a while.”

On May 8, 2017, Zhan’s heart stopped. She immediately underwent a 55-hour surgery at Shandong’s Yinfeng Life Science Research Institute to cryofreeze her body. Before she was placed in the cryogenic tank to be preserved for 50 years, Gui took once last look at his wife. She looked like she was asleep.

The cryogenic tank is filled with 2,000 liters of liquid nitrogen and kept at a temperature of -196°C. Zhan is not the only person to be preserved via cryogenics at the Yinfeng Life Science Research Institute. To date, 10 people, ranging in age from 13 to 72, have been frozen at the institute.

To date, there are around 350 cryogenically frozen individuals in the world, the majority of which are in the United States. No individual has so far been brought back to life.