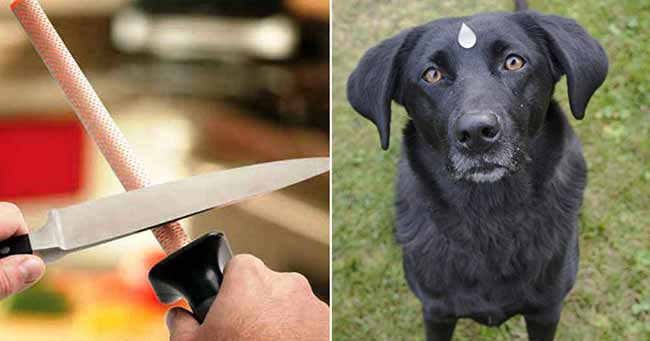 This is a story of a dog about to be slaughtered in the hands of a butcher. Somehow, he refused and released the dog. What happened next has changed his family’s luck.

Lao Cai was a butcher, and many animals died every year at his hands.

One day, his neighbor, Lao Wang brought a black dog to Lao Cai’s house. The dog didn’t look ordinary, though.

Lao Wang said that he had caught the dog in the mountains and asked Lao Cai to cut it. He promised to give the dog’s legs to Lao Cai in return.

When Lao Cai came home in the evening, he had a little chat with his wife, and then went out to slaughter the dog.

The dog had black fur all over its body, with white fur in the middle of its eyebrows, which looks like it had three eyes.

Lao Cai sharpened his knife and then took the dog out of the cage for slaughter. Usually, when dogs are about to be killed, they struggle and bark loudly.

However, the black dog did not make the slightest sound but stared intently at Lao Cai with its two big eyes. Even though it felt strange, Lao Cai still went on preparing to slaughter it.

“Wait a minute,” Lao Cai’s wife Su suddenly came out of the house and asked her husband to stop the preparations.

Su came closer and looked at the black dog closely, and she saw that its stomach was slightly swollen. She reached out and touched the dog’s belly a few times.

“This dog is pregnant, don’t slaughter her,” Su told her husband.

Lao Cai and Su had been married for more than ten years, and they still had no children at nearly 40 years of age.

This was very painful for the husband and wife, and the villagers secretly gossiped about them.

When Lao Cai saw that the black dog was pregnant, he couldn’t help but think about himself, feeling that he was more inferior than a dog for not having children, and his heart really hurt.

Lao Cai sighed, took the black dog to the edge of the forest, untied the leash, and said to the black dog, “You are free to go.”

That evening, Lao Wang came to pick up the dog meat. Lao Cai apologized and compensated Lao Wang with an old bottle of wine.

In the second year of the Yuan Festival, a traveling Taoist priest passed by Lao Cai’s house to ask for water.

Lao Cai was shocked to hear that, and hurriedly knelt and begged the Taoist priest for help and blessing.

The Taoist said that it was because Lao Cai killed too many creatures in his life, and now he was surrounded by evil spirits. If he doesn’t stop his job soon, his family will be ruined when he gets old.

The Taoist priest convinced Lao Cai, right then and there to no longer kill any more animals. He also instructed Lao Cai to burn incense and bathe in incense ash every day for three months to purify evil spirits.

By the Taoist priest’s request, Lao Cai has changed professions, the husband and wife started eating vegetarian food every day, burn incense and pray day and night, and do good deeds.

During last year’s Mid-Autumn Festival, Su was not feeling well, so Lao Cai brought her to the doctor. It turned out that Su was pregnant, which caused the body’s reaction. The couple also considered the Taoist priest as their guide.

The birth of the baby was coming soon. Lao Cai invited the midwife to stay at his house early, and prepared everything to be used.

When the day finally came, Su felt something different in her stomach, and the midwife said that she was going to have the baby in a little while.

But after a few hours, the baby had not yet been born, and the midwife came out in a panic to tell Lao Cai that the dystocia (birth disorder) has threatened his wife’s life, so Lao Cai had to prepare for the worst.

Lao Cai was drenched in a cold sweat at that moment, feeling like the sky was spinning, and he fell unconscious on his veranda.

Not knowing how much time had passed, Lao Cai faintly heard the barking of a dog, and then a baby’s cry woke Lao Cai in a bit of a daze.

The midwife rushed out, telling Lao Cai that Su had given birth to a son and that both mother and child were miraculously safe.

However, there was something unusual in the midwife’s facial expression, she is a little confused by Su’s dystocia but the mother and son are fine.

Later, Lao Cai discovered something from his wife. Su said she had the strangest dream. When she fainted from dystocia, she felt like she was in a fog, surrounded by a group of dogs that were constantly attacking her. When she was being stomped by the hoof of one of the stray dogs, suddenly a big black dog with three eyes appeared from the fog and chased the animals away, saving Su’s life.

Eventually, the black dog brought Su out of the fog and turned into a person who looked like a monk.

After bringing Su to safety, he turned into a puff of smoke and disappeared. Su then regained consciousness and gave birth to a son.

Lao Cai and his wife understood that the black dog they had released had saved her and her child’s life.

After that, the couple did good deeds, and they became well-known for doing kindness in the local area.

His son grew up and married a good wife and had four sons. Surrounded by children and grandchildren, Lao Cai and Su, enjoyed life and happiness until their old age.