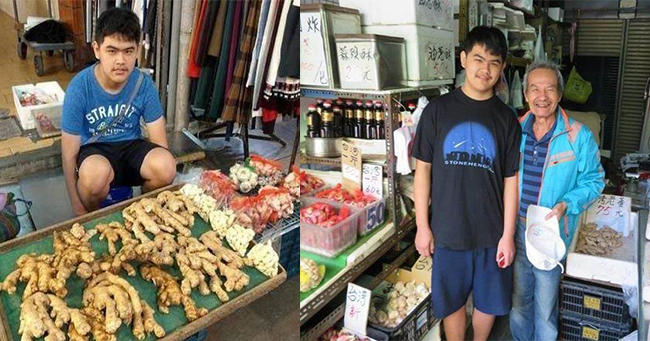 In Chiayi County, Taiwan, there is a boy named Chen Youan who is 16 years old and has been very wise since he was little. To repay the kindness of his grandparents, he set up a market stall to help support the family.

Chen Youan’s story was shared by local resident Yang Shixu on Facebook. Through his posts, everyone can get to know this virtuous boy better.

Chen Youan was the third son of his Grandfather’s daughter. Since the three children were all boys, his Grandpa’s daughter deliberately wanted to give Youan to someone else.

Perhaps because of the deep bond between grandfather and grandson, the grandfather refused to leave Youan to someone else, so he decided to take care of him.

To support him, his grandfather sells in the market.

To reduce his grandfather’s economic burden, when Youan was 13 years old and in junior high school, he sold garlic and ginger on his stall in the market.

Even after he was evicted by the market manager, he didn’t want to give up. Instead, it caught the attention of many people and bought from him.

Now, he is in high school. Unlike today’s game-loving youth, he doesn’t have a luxurious material life like his peers.

He made money with his own hands. A local official who knew Youan’s history asked if he needed help. Unexpectedly, Youan refused.

“No matter how hard I work, grandpa and grandma always give me three meals, so that’s enough!” he said.

All he asked was that he be allowed to sell in the market.

Netizens were very touched after reading the story, and they left messages of support:

“I have bought garlic from him. The boy is very polite.”

“The best interpretation of the devoted son from a poor family.”

“A dutiful and wise son.”

One even supported him and said: “I hope the children will be as filial as he is, that kid is really great!”

Such a devoted grandson will surely promise a bright future ahead and make his grandparents proud!

The mother was hesitant to send her daughter with Down syndrome...