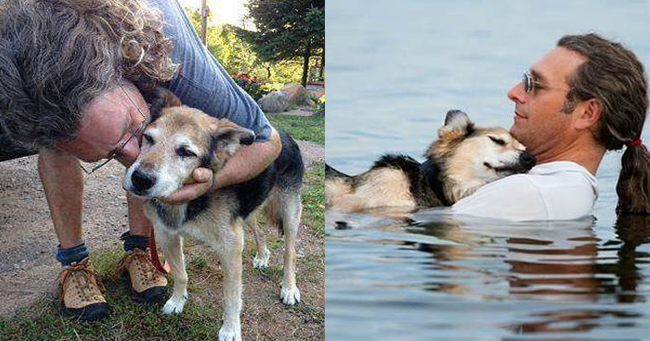 John Unger, a man from Wisconsin, USA, adopted a stray dog, Schoep when he was just 8 months old. Schoep grew up until he turned 20 years old. He grew very old, and his life was not getting any longer. His owner was preparing for the inevitable.

John lived with Schoep for 19 years. However, Schoep had long suffered from arthritis and was paralyzed. The vet suggested putting the dog to sleep, but John didn’t agree.

In the last few years of Schoep’s life, John took care of him as best he could, looking after him, holding him, and reluctant to leave him. John was by his side at all times.

To relieve Schoep’s joint pains, John took him to the lake to relieve the pressure on his joints and muscles. Sometimes, because the flow of water was too comfortable, Schoep would often fall asleep in his owner’s arms.

This heartwarming photo was taken by John’s friend, Hannah, a photographer who uploaded it on the internet, which immediately sparked a heated discussion and touched many netizens.

At first, John met Schoep at a difficult time in his life. At that time, John promised to treat Schoep well, and finally, John fulfilled his promise.

Even when Schoep was about to die, John was still trying to make him survive, insisting on always accompanying him to the most joyous moments in his life.

In 2015, John finally came out of his grief of losing Schoep and brought in a new member of the family, Xiong. As soon as this news spread, many netizens were delighted!

Many netizens are happy that John has finally started his life cheerfully again and is willing to open his heart to a new dog.

Share the story of this warm friendship and send your prayers for Schoep, who is at peace in Heaven.