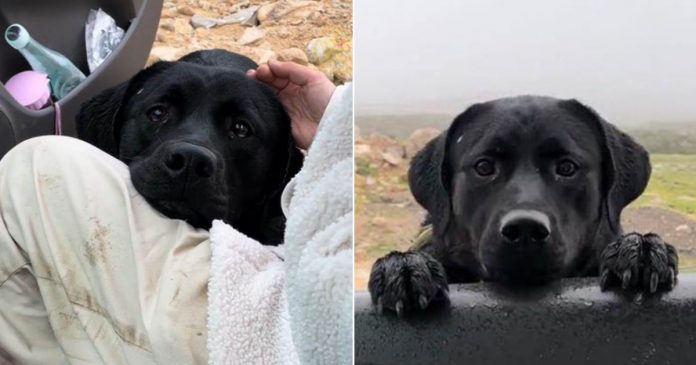 In mid-June, a street cleaner and his friend went to Mount Zheduo in Ganzi Prefecture to do some work. After finishing their job, they drove home. Then suddenly, they saw a small black dot in the distance in the desolate mountains that seemed to be moving towards them.

As the car got closer, they discovered that the black dot was a black Labrador dog!

Because it had been raining in the area before, the dog’s body was drenched. After he saw the car parked not far away, the dog immediately ran towards it, hoping to catch up.

A woman janitor was sitting in a car window which was opened. The dog was panting from running, then jumps and puts his paw on the window. His eyes were full of anxiety, afraid to be alone.

What surprised them was that this dog had a collar around his neck indicating that he was a pet dog. However, the area was a place very rarely traveled by people. How did the dog get there?

After the woman opened the car door, the dog took the initiative to rest its head on her lap, with a look of joy and tears in her eyes, looking at her pleadingly, constantly grunting.

Seeing the dog’s reaction, the woman finally couldn’t hold herself back her tears immediately flowed. Who could stand such a gaze?

A dog would definitely not be able to survive in the mountains alone. They decided to take the puppy home.

Since their work was not finished, the dog could only be brought to the place where they worked temporarily. After getting along with him, they discovered that this labrador was a male dog and very smart. He can carry out some simple instructions, such as sit down and shake hands, this dog seems to have been trained.

Since the dog has been taken by the woman, he has always been by her side. Whenever the woman worked, the dog would hold her close and not let go, perhaps he was afraid of being abandoned again.

After the woman finished her work, the dog was taken to the vet for physical examination and neutering. Incidentally, the dog has been adopted by the cleaning lady.