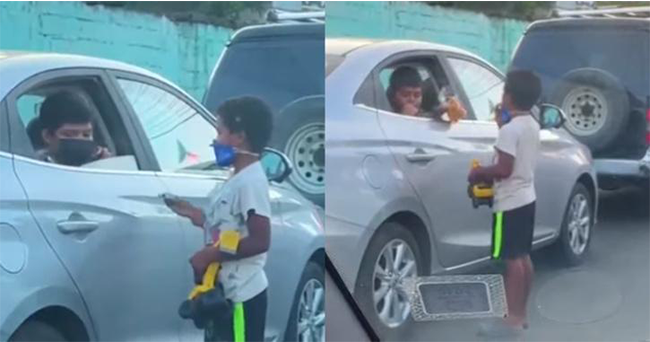 In today’s highly competitive world, there is so much negativity in everyone’s daily lives. It’s easy to get caught up in a social media war, and it’s not uncommon to find people who shut themselves off from the community around them.

Luckily there are still good people around the globe. Many situations prove that in this world, there are still people with good values. A recent viral video on social media showing a boy giving his toy car to a homeless boy he saw on the street.

The clip was first shared on McLiez’s Facebook account and has been liked nearly 1 million times and has been shared more than 169 thousand times on different social media platforms.

In this one-minute video, a small child is seen approaching a car that appears to have stopped at a traffic light.

A boy sitting in the back seat of the car rolled down the window and started talking to him. He then gave him some of the toys he had.

However, the boy in the car refused to take the toy car back and forced the homeless boy to accept it.

As a sign of gratitude, the homeless boy rushed to the other side of the street and returned with a packet of food that he was selling and offered it to the boy in the car. The two boys said goodbye with bright smiles on their faces.

The video was apparently recorded by someone who saw the incident during that touching moment.

Good vibes be showered to everyone around the world!

Five things you may have missed over the weekend