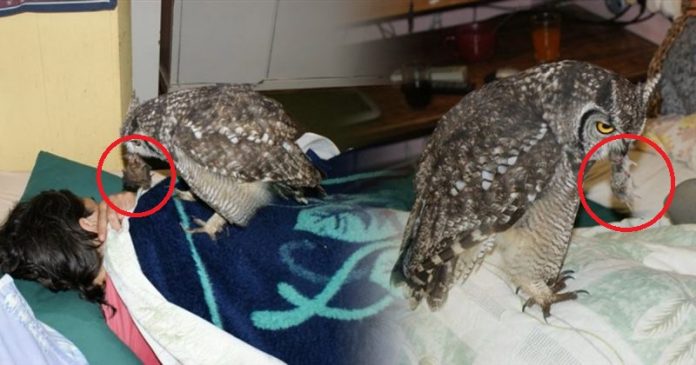 There are many stories around the world about animals repaying their kindness to rescuers. The following incident happened in South Africa, wherein an injured owl repaid its owner with a rat it caught before visiting him at home. The owl also gave gifts to its owner’s other pets.

In 2011, a South African man discovered a wounded owl. He liked animals very much, so he immediately took the owl home and took care of it for more than two months. During this period, the relationship between the owl and the man grew stronger, and they also became good friends with the cats and birds in the house.

The owl has left its rescuer’s home after recuperating for some time, but it has not forgotten the kindness of the man and has insisted on bringing gifts back for many years.

▼For an owl, the best gift is of course food, and its favorite food is mice…

▼The bird at its owner’s home is also a friend, so it also gave gifts to the bird.

▼Birds like this gift very much, their relationship is very good.

▼For 4 consecutive years, every time the owl came back, it would bring mice as gifts.

▼Sometimes when the rescuer is sleeping, it waits aside with a mouse in his mouth. “Get up, wake up, and eat fresh mice!”

▼For people, such a gift is terrible, but this gift is given from the heart by the owl.

▼It can also catch other prey.

Over the years, the owl has not forgotten the kindness of the man, and always comes back with gifts when visiting him and his animal friends. Every time it comes back, the cats and birds at home are very happy, because the gifts are much to their wishes. Of course, the man is also very happy, but this gift is a bit unbearable for him…