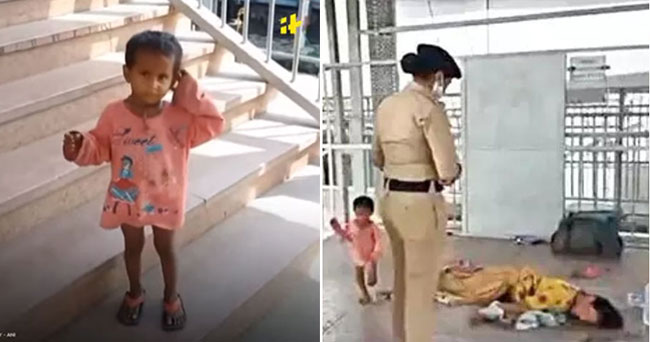 What does a two-year-old know about life? Many people will definitely answer that all they know is just crawl, cry, eat, and live a stress-free life with their parents, right?

However, in the Bareilly district of Uttar Pradesh, India, a 2-year-old toddler, who can barely speak or even walk, saw her mother lying unconscious on a train station platform with her six-month-old baby sister and her first reaction was to seek help.

She traveled a few meters to a different train platform and met some of the policemen who were there. She tried to tell them that something was wrong. Observing the child’s movements, the police felt that something was off and decided to follow the little girl. They were shocked when they found her mother and sister lying unconscious.

They quickly called an ambulance and the woman was eventually admitted to the district hospital. She is still unconscious and the identities of the mother and her children are unknown. The incident took place at the Moradabad railway station.

Later, the police described the whole incident and talked about the little girl. She looked worried and struggled to convey something to them. After trying to ask the girl, she beckoned them towards the opposite platform and held the hand of one of the policewomen, after which the team accompanied her and reached her mother.

Emergency medical officer, district hospital, Dr. Shobhit told India Times: “Police came to take the woman with two children from the railway station. The woman, who appears to be in her 30s, has been placed under surveillance. The identity of the woman and her children has not been confirmed as she is currently in a semi-conscious state. Further information will be asked as soon as the woman regains consciousness.”

It’s great to know that a child can do something so brave at such a small age. Thumbs up for this little girl who helped her mother!