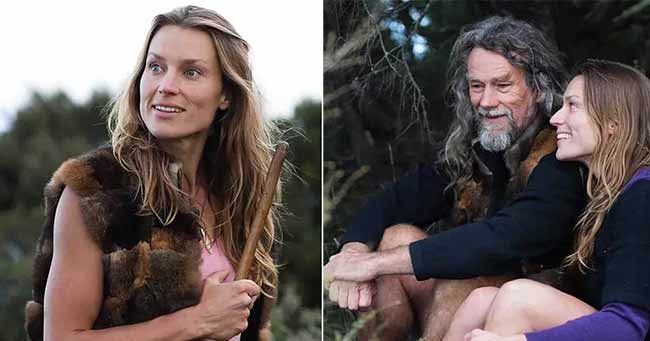 Urban life is very competitive and stressful. Many people dream of finding a place just like paradise to live away from the busy and congested city life. For most people, this dream may just be a fading mirage. But there are always people who turn their dreams into reality.

Miriam Lancewood, 34, a woman originally from the Netherlands and now living in the wild in New Zealand. Since 2010, she has been living in the forest with her 64-year-old husband, Peter, hunting in the wilderness for food, without a phone, refrigerator, Internet, or even a watch and toiletries.

The couple did some field training before heading to New Zealand, including several 10-day hiking trips to learn survival skills including making a fire in the rain.

Previously, Miriam was a physical education teacher, so her stamina was unquestionable. Although her husband is thirty years older, his health is quite good.

However, even with adequate preparation, life in the wild is not as easy as one might think. Some trivial things would become troublesome in the wild.

Without shampoo, Miriam suffered from severe dandruff during her first winter. Fortunately, her husband had heard about the dandruff treatment using morning urine, from an Eskimo.

Miriam decided to give it a try, poured morning urine on her head, then washed it off with soap, and found that the effects had changed for the better.

Apart from shampoo, they also didn’t have toothpaste and toothbrush. Miriam uses charcoal ash to brush her teeth every day.

Miriam recalls that when they decided to leave town in 2010, they threw away almost everything, leaving only a few of the clothes needed.

Except for those they brought with them, most of their food came from hunting. Apart from using a rifle, Miriam also uses arrows.

She was a vegetarian before, but to survive in the wild, she had to hunt and eat meat.

Miriam said she cried after shooting a goat for the first time, but at the same time, she was proud of herself.

In an interview on a TV program, Miriam described her daily life in the wild.

They don’t have clocks, so they don’t know the exact time. They only work at sunrise and rest at sunset.

After the sun rose, they went looking for firewood and made a fire, made tea, and had a breakfast of toast. After breakfast, they go hunting.

Miriam says that when winter nights are long, they may sleep for 13 to 14 hours. Whether they will come out or not depends entirely on the weather. When the weather is bad, they only stay in the tent.

Although life in the wild seems very difficult for modern people, the couple is used to this way of life. They do not use any modern facilities, and only go to nearby towns when they need to buy food.

Both of them had deposits in the bank. Whenever they are in the city, they would play guitar outside the shopping mall to earn a little money.

Even though life is difficult, Miriam says that it is very nice to be free from modern civilization.

“I can’t sleep in the city anymore. It’s easy to fall asleep when your mind is calm in the wild,” she said.

Miriam also wrote a book about herself and her husband living in the wild, entitled “Women in the Wilderness: A Story of Survival, Love, and Self-discovery in New Zealand.”