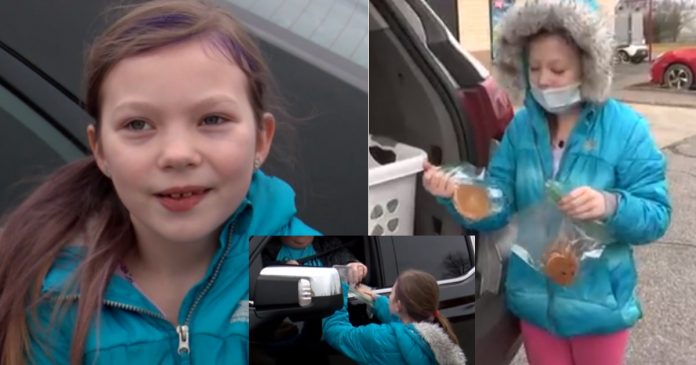 People encounter various sad incidents in life. Nine-year-old Kaylei from Fairdale, Louisville, Kentucky, lost her father recently, and the family did not have enough money for his funeral. The young girl came up with a solution that moved netizens and praised her!

Kaylei’s father, Jason Barton, died in a serious car accident early this year, but because he had no life insurance and had little savings left, the family could not come up with the fund for his funeral and say their simple farewells.

At first, Kelly was just selling her cookies to her neighbors, but after press and media reports, several people who either watched or heard about her story drove to Kaylei’s town to buy her snacks.

“My wife lost her father in fourth grade, and she still remembers that time.” One buyer said.

“We know the pain this little girl is going through, and we want to help her.” said Jack, who not only bought two chocolate biscuits, but also generously donated $1,000 to Kaylei!

“I just want to say thank you to all who helped us, and those who really care about us moved me to tears,” Kelly told the media. “Just so grateful. I cried yesterday because of all the people who actually cared.”

Everybody needs help. Many kind-hearted people around the world are more than willing to lend a hand.