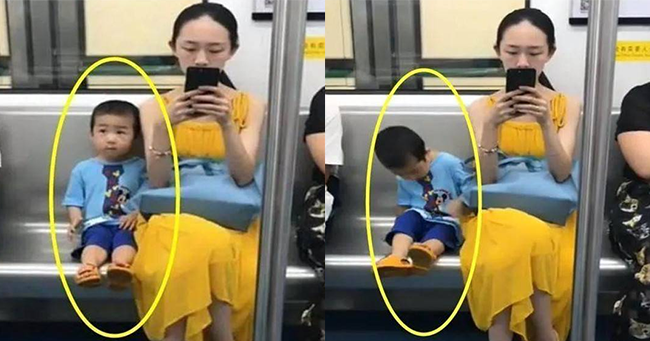 In this day and age, we often encounter children who talk and behave inappropriately in public. Although the nature of the child is always visible in public, as a parent we must educate the child about the limitations that must be done in public places.

With the right teachings and deeds of parents, the children can have a higher level of moral achievement.

Not long ago, some netizens saw a mother and her son riding the train.

Even though the mother and son were just sitting quietly on the train bench, what they displayed in public was praised by the other passengers.

The little boy sat in the carriage seat near his mother, quietly sitting in a very upright posture, with his little hands resting on his lap.

Even though the train ride was a bit long, the little boy still sat quietly and looked very disciplined, and even though his mother was busy with her mobile phone, the little boy didn’t ask for it and didn’t even bother her.

When he sees more people boarding, the little one snuggled closer to his mother, hoping to make room for someone else who wants to sit. Compared to the other children his age, the little boy behaved very politely.

Many say that the behavior children display in public is the result of their parents’ upbringing, and it is also a home educational achievement that parents are most proud of.

After seeing the behavior of this little boy and comparing him to the other children on the subway, many netizens sighed at the huge difference among them.

Another child on the same train used the pole as a climbing toy, and showed everyone that he was like a “Monkey Climbing a Tree”.

The child’s parents did not stop him and even let the child play on his own so that they would not be disturbed when they were busy with their cellphones. When the child falls, the parent will scold him.

Seeing this child’s behavior, the passengers are also getting restless, and the impression that they gathered from the parents is that they are not educating their children properly.

What is the behavior of an educated child like?

A person who knows how to be polite, whether he is a child or when he grows up, will be liked by many people.

Although it seems like just simple words, it is the basis for someone who is polite and has good ethics.

Usually, the children would get upset or roll on the ground, or worse of all, when some children lose their temper, they would kick their mother or hit their father.

The first reaction of those who see this kind of behavior feels disgusted and think that the children had not received proper education from their parents.

As for educated children, when mothers refuse to buy them toys, they listen to their mothers carefully and obediently, waiting for the right time to buy and not resort to crying.

What should parents do to raise educated children?

Set a good example, take the initiative to greet people, give seats to people who need it more, and don’t make unnecessary noise in public. Show good behavior.

Whatever the parents show, the children will imitate.

Most of the children’s behavior comes from the upbringing of their parents.

To be able to educate children to behave politely, they must have a good attitude and lots of patience.

After all, raising children to become educated people doesn’t just take 1 or 2 days.

If a child makes a mistake, parents should understand the situation and educate their children properly.

Sometimes when children do not know what to do, parents must communicate with children patiently.

Without losing patience, your child can subtly form good behavior.

A good education begins at home.