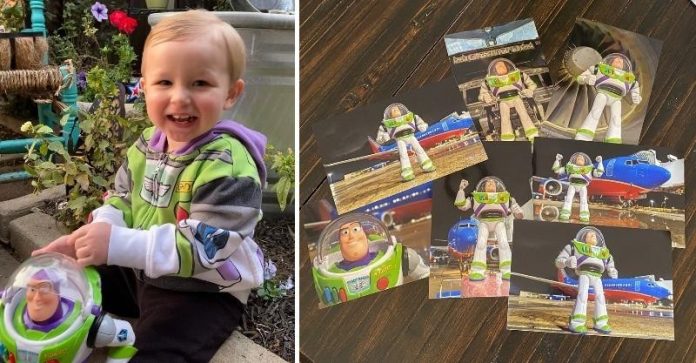 I believe everyone who has watched Toy Story can understand how important and precious the beloved toys are to the children. If they are accidentally lost, we can just imagine how sad these kids can be! Children have a way of playing in their own make-believe Toy story world.

Hagen Davis, a 2-year-old boy in the United States, likes Woody and Buzz Lightyear in Toy Story very much. He even owns an exquisite Buzz Lightyear toy and he plays with him every day. But not long ago, when he took a Southwest Airlines trip to Texas that included a stop-over in Arkansas, with his mother, and he accidentally left Buzz Lightyear on the plane!

His mother, Ashley Davis, said that her son Hagen was very upset, because he really liked Buzz Lightyear, and even imitated Andy in the animation, writing his name under Buzz Lightyear’s shoe! But then his mother found out that the plane had already flown to the next waypoint, and the cost of registering the lost property alone was more than the price of Buzz Lightyear, so she had to tell her son, “Buzz Lightyear went to outer space for a mission!”

Southwest Airlines staff Jason Hamm accidentally found the lost Buzz Lightyear toy on Hagen’s seat on the plane. Jason thought that “someone must miss his little friend very much.” After a closer look, he found a name written on the sole of Buzz Lightyear’s shoe. It says “Hagen”, and after checking the passengers manifest, it is confirmed that the owner is 2-year-old Hagen! So he contacted Hagen’s mother via e-mail, and finally returned Buzz Lightyear to Hagen via a parcel!

There were not only cute illustrations on the outside of the package but also a heart-warming surprise inside the box! The staff specially attached a series of lovely photos of Buzz Lightyear’s adventure in the Arkansas airport — sitting on the pilot’s seat of an airplane and standing on the airport runway. The mother was moved and said: “I didn’t expect anyone willing to spend time with strangers to do all this, for us, this is the world.”

Buzz Lightyear also attached a warm handwritten letter, “To Commander Hagen, I am very excited to return to you upon completing my mission. I was able to explore the airport and spaceport in Little Rock, Arkansas while I was away and I have included photos of my adventure. My journey has taught me a lot but I am so thankful to return to my buddy.” At the end of the letter, Jason did not forget to write Buzz Lightyear’s signature line, “To infinity and beyond”!

After receiving the package, Hagen was a little skeptical at first. Later, after seeing his name on Buzz Lightyear’s shoe, he finally was happy. Southwest Airlines put this touching story on Facebook and said: “Hagen’s reaction is priceless.” In just one week, it accumulated more than 150,000 likes!

All I can only say that the airline employees are so kind, honest and heart-warming~~ The smiles of a little boy like Hagen are the best treasure!!

To infinity and beyond!